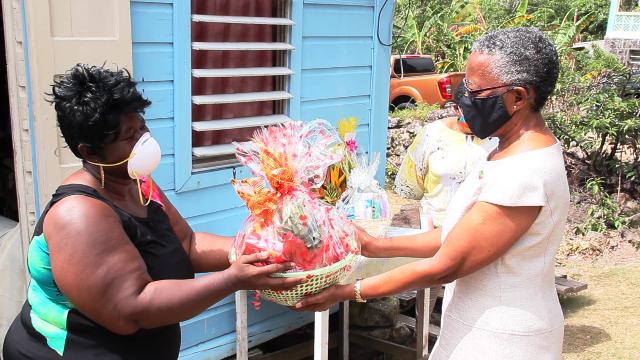 Her Honour Mrs. Hyleeta Liburd, Deputy Governor General on Nevis presenting a fruit basket to Mrs. Denise Browne for her mother-in-law, 103 year-old Mrs. Mary Brown of River Path, on behalf of His Excellency Sir Tapley Seaton, Governor General of St. Kitts and Nevis and the people of the Federation in observance of Centenarians Day celebrated on May 31, 2020

NIA CHARLESTOWN NEVIS (May 31, 2020) — The following is an address delivered by Ms. Joyce Moven, Deputy Director in the Department of Social Services on behalf of Hon. Eric Evelyn Minister of Social Services in the Nevis Island Administration (NIA), to mark Centenarians Day 2020, which is observed by St. Kitts and Nevis on May 29, 2020.

Population ageing is a global phenomenon. According to the United Nations World Population Ageing Report 2019, ‘virtually every country in the world is experiencing growth in both the size and the proportion of older persons in the population.

The report further noted that Latin America and the Caribbean has been one of the regions with the fastest growth rate with the pace of population ageing increasing from five percent in 1990 to nine percent in 2019. At the global level, life expectancy at birth has reached 72.3 years, with women on average living five years longer than men – 74.7 years and 69.9 years respectively.

However, the gender gap in longevity is largest in Latin America and the Caribbean, with a difference of 6.5 years between women and men. In 2018, for the first time in history, persons aged 65 or above outnumbered children under five years of age globally.

In 2002 the Second World Assembly on Ageing held in Madrid, was aimed at designing an international policy on ageing for the 21st century with a plan of action which called for changes in attitudes, policies and practices at all levels to fulfil the enormous potential of ageing in the twenty-first century. Its specific recommendations for action gave priority to older persons and development, advancing health and well-being into old age, and ensuring enabling and supportive environments.

Nevis in itself has produced many centenarians and until October 2019, had the distinction of having the oldest living person in the Federation Ms. Celian ‘Martin’ Powell (107). Sadly, Ms. Powell has passed to the great beyond but her legacy still prevails much like all the other centenarians.

Today we proudly celebrate with our two surviving centenarians Mrs. Mary ‘Mem’ Browne (103) of River Path and Eliza Jeffers Liburd (100) of Hamilton.  Our centenarians have shown that they have the surviving mechanisms firmly in place having lived through wars, the Great Depression and now are living in the midst of the coronavirus worldwide pandemic – COVID-19, and let’s not forget they were the pioneers for independence. They have laid the solid foundation for this our island, and their collective contributions must be etched in the annals of our nation’s history for posterity.

While we continue to celebrate our national treasures, let us pause and pay tribute to the caregivers who daily care for their every needs. Their selflessness and call to duty should forever be remembered for the excellent care given to our centenarians, who without them I am confident would not have been looking so vibrant and healthy.

We must also acknowledge the financial and emotional support provided by other family members and the extended community so that these centenarians can live out their golden years with dignity and in their own natural environment.

So today as we gladly join with our counterparts in St. Kitts in celebrating our Federation’s centenarians and more specifically those residing on Nevis, I want to extend best wishes to all and look forward to returning again next year to celebrate another Centenarians Day.

I would like to end with this quote from Raymond Moody ‘A sense of humor has been linked with longevity. It is a possibility that the mental attitude reflected in a lively sense of humor is an important factor predisposing some people toward long life.’