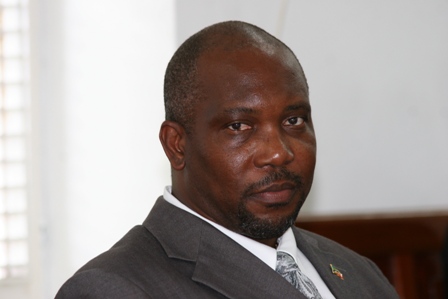 CHARLESTOWN NEVIS (May 11, 2010) — The people of the Caribbean must identify the opportunities and implement the changes that would allow them to reduce their dependence on fossil fuels. The challenge came from Minister responsible for Natural Resources and Public Utilities on Nevis Hon. Carlisle Powell, when he made a presentation recently on Technological Cooperation, Renewable Energy and Energy Efficiency-Frameworks – Strategies – Perspectives at the European Union – Latin America and the Caribbean Forum in Berlin.

He said fossil fuels were the cause of high electricity rates and stress and it was important for the Caribbean’s people to recognise that energy efficiency should be more than just a word.

“It must be a habit; it must be practiced!  Greater use must be made of energy efficient light bulbs and these bulbs must also be readily available at affordable prices or our people will continue buying the cheaper conventional bulbs.

“Our architects must design homes and buildings that allow more efficient use of natural light for longer periods of the day!  Windows and doors must offer better protection against entry of the external heat and must allow retention of cool air from air conditioning.  All government buildings which use hot water should be designed and built with solar water heaters,” he said.

Mr. Powell pointed to Peru which had 96 percent of its street lights powered by solar energy, however, Nevis which had sunshine almost every day of the year did not have a single solar powered street light.

He called for greater support from Peru and other Latin American states to assist its Caribbean neighbours with the technology and support necessary to replace the island’s conventional street lights to solar street lights.

Notwithstanding, the Mr. Powell hailed the assistance Nevis had received from Caribbean Community, the Organisation of American States and the government and people of Iceland in its development of renewable energy but cited that for the continuation of renewable energy development in the region, cooperation was needed at a sustained level.

“Our developmental partners must fully understand the dependence of small island states on fossil fuels and our need for access to cheaper funds.  Our partners must commit to technological transfers to help us move towards renewable energy solutions.

“None of the small island states have traditional natural resources such as oil, natural gas, or large quantities of mineral deposits.  Simply put, we are mineral poor but rich in sun which can be used for solar energy, sea for ocean thermal, wind for wind energy and some of us with water for hydro energy.  We must use what we have efficiently.  Also, we have to encourage bundling of projects to achieve economies of scale,” he said.

The Nevis Minister noted that the islands competed against each other with the same sea, and sun for the same tourists and it was imperative that they identified areas in which they had a comparative advantage.

He explained that with the Nevis experience in which the Nevis Island Administration sought to expand the industrial base through the development of cheaper alternative sources of energy –  wind and geothermal – the greatest need in technical cooperation became evident.

Mr. Powell referred to the need for better access to undertake the necessary studies. These studies he said could be expensive and the resources to conduct and or to fund them are very often not available on island.

According to the Minister, there was also the need for guidance in screening and proper selection of project partners.

“It is absolutely important that we take the time to perform due diligence and carefully select our project partners as we move potential developments forward. Many potential investors jump at the chance to impress unsuspecting governments with glib tales of projects that can provide huge employment and millions of dollars for the treasury.  Several of our governments have worthless agreements that have been signed for various developments.   Many governments face expensive legal battles to end some of these bad agreements,” he said.

There was also the need for experienced help for the development of laws and regulations and negotiation of contracts and Power Purchase Agreements (PPA). Mr. Powell said good legal services were not cheap and many developments were delayed because the Caribbean lacked the legal drafting skills and determination to move the vital projects towards completion.   Fortunately for Nevis, the OAS assisted in the development of the Geothermal Bill, Contract and PPA.

The Minister also pointed to the need for financial resources to properly capitalise projects citing that in the absence of grant or low interest funds the small island states would find it difficult to provide counterpart funding for numerous studies.

“In many instances, as we look for counterpart funding, the time between the presentation of projects and actual funding result in the escalation of the cost of the project way beyond the original estimate. Another area that severely hampers us is the challenge of providing guarantees.  How do we move projects forward when lenders demand guarantees in various forms and when the cost of providing guarantees paralyses us?” he questioned.

The Minister also addressed the need for technical competence to oversee project implementation; Interconnection and Education.