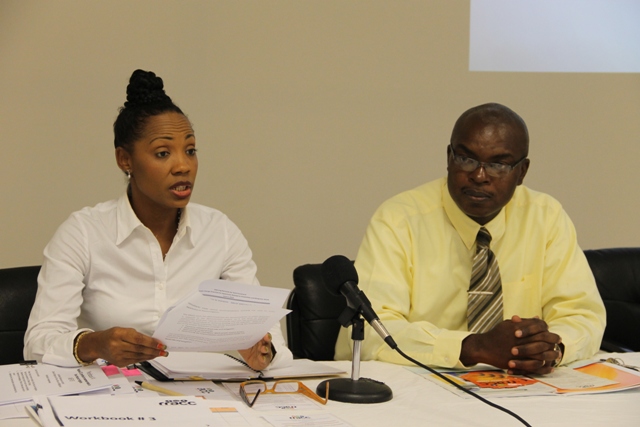 (L-R) Communications Specialist at the Organisation of Eastern Caribbean States (OECS) Secretariat Tecla Fortenard delivering remarks at a one-day consultation hosted by the OECS Secretariat in collaboration with the Nevis Island Administration on June 05, 2014 at the Emergency Operating Centre at Long Point and Ernie Stapleton Permanent Secretary in the Ministry of Communications, Works, Public Utilities, Posts, Physical Planning, Natural Resources and Environment on Nevis
NIA CHARLESTOWN NEVIS (June 06, 2014) —  A number of representatives from government agencies on Nevis participated in an Organisation of the Eastern Caribbean States (OECS) Secretariat awareness campaign for flood risks and mitigation in a one-day consultation at the Emergency Operations Centre at Long Point on June 05, 2014.
At the event hosted by the OECS Rally the Region to Action on Climate Change (RRACC) Project which is funded by USAID in collaboration with the Nevis Island Administration (NIA), Tecla Fontenard, Communications Specialist at the OECS Commission spoke to the importance of the consultation and what she hoped would be achieved at the end of the session.
“[The] one-day consultation is mainly for the purpose of developing an implementation plan for communities on climate change-related issues and in particular, on flood risks and mitigation.
“Activities under this plan, as far as possible, will receive funding support from the RRACC Project. We would, therefore, like to encourage the development of at least a one-year campaign starting as soon as possible, continuing through 2015,” she said.
Fontenard explained that the OECS Secretariat created a Climate Change Unit in 2012 and the RRACC Project which began in 2010 was situated within that unit.
According to the Communications Specialist, the RRACC Project is of a five-year duration aimed at assisting countries with building resilience to climate change, through a series of interventions which included policy and institutional strengthening; demonstration projects which show climate change adaptation; and training, capacity building and awareness raising.
The full RRACC team began implementation in January 2012 and the project had a current end date of September 2015.
However, under the awareness component of the project, a campaign with many facets was launched called the “Climate-Ready Campaign.” That campaign is ongoing and would continue till the end of the project.
As part of the Climate-Ready Campaign, Fontenard noted, that countries with national activities would be assisted and the consultation was aimed at determining the priority awareness needs of Nevis as it relates to climate change and flood risks and mitigation.
“In support of the development and implementation of a public awareness campaign for Nevis, the RRACC is guided by recommendations from the consultant firm of Halcrow, which recently conducted a comprehensive study on flood risks and subsequently developed a drainage master plan. 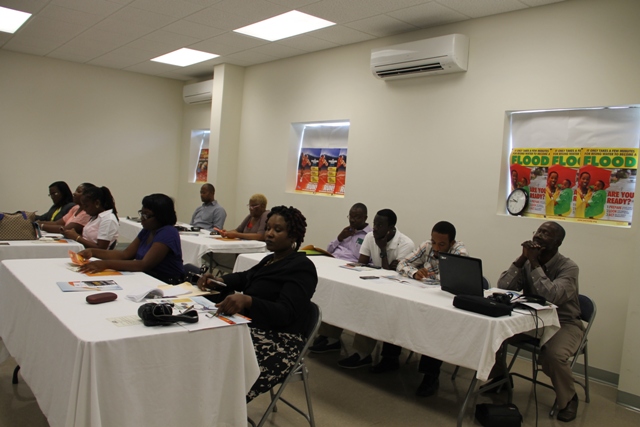 “In the plan, the consultants made several recommendations including the need for public awareness on flood mitigation,” she said.
Fontenard further stated that the RRACC team had determined that the recommendation on public awareness was essential to the demonstration project, as it would serve to empower communities build their capability and provide them with the necessary skills and tools that could contribute to resilience building and risk reduction.
Also present was Ernie Stapleton, Permanent Secretary in the Ministry of Communications, Works, Public Utilities, Posts, Physical Planning, Natural Resources and Environment, and Director of the Nevis Disaster Management Department (NDMD) Lester Blackett.