Acting Premier of Nevis Hon. Mark Brantley (middle front) leads colleague Ministers and other members of the Nevis Island Administration Cabinet at the 30th Child Month Parade in Charlestown on June 06, 2014
NIA CHARLESTOWN NEVIS (June 06, 2014) –Acting Premier of Nevis Hon. Mark Brantley and his colleagues in the Nevis Island Administration Cabinet joined a number of pre-schoolers, their parents, teachers and Education Officials at the annual Child Month Parade, which wound its way through Charlestown on June 06, 2014 in celebration of the 30th anniversary of Child Month in St. Kitts and Nevis under the theme “Child Month at 30: Celebrating our Achievements.”
In brief comments, Mr. Brantley told the Department of Information that the Administration’s show of support, was to underscore the NIA’s commitment to the development of the island’s youth.
“We are all out here with our children showing commitment as an Administration to the youth in the country and to the young ones, the very little ones, who clearly we hope will be moulded and will grow up to be productive citizens in St. Kitts and Nevis,” he said. 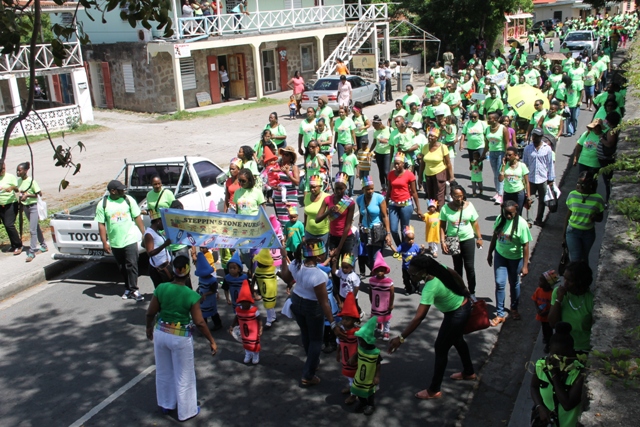 The Acting Premier also recognised a contingent who had come to take part in the march on Nevis.
“You just experienced the 30th anniversary of the Child Month March. I think it’s probably the biggest I have seen and we are very happy to see a contingent from St. Kitts as well and we have taken over the streets of Charlestown today, to demonstrate our commitment to children, our commitment to our future. So that’s what you are seeing today and we look forward, of course, next year it will be even bigger and better,” he said.
Meantime, in an invited response as to the significance of the 30th anniversary of the Child Month Parade, Mr. Brantley said the achievement was a remarkable one.
“Certainly ,30 years is a long time by any standard and for us to be doing this and accomplishing this for the past 30 years, I think is very significant. 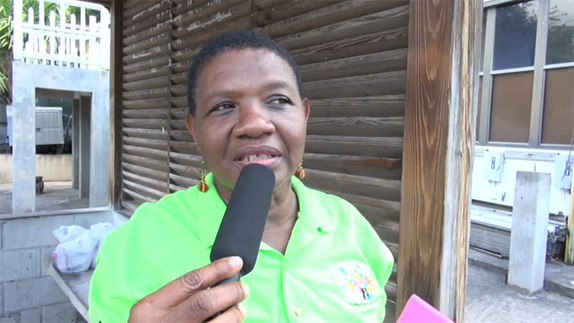 “For me, it’s demonstrative again of the emphasis that is being placed on youth and youth development and the seriousness with which we, as a government and previous governments, have approached this so I am very happy. Thirty years, I look forward to being around for the next 30 years,” he said.
An elated Principal Education Officer in the Department of Education on Nevis Palsy Wilkin, commended those who, in her view, made the celebration successful.
“I really want to congratulate the persons at the Early Childhood Unit Mrs. Florence Smithen and Mrs. Dawnny Lanns for putting on such a celebration here this morning. 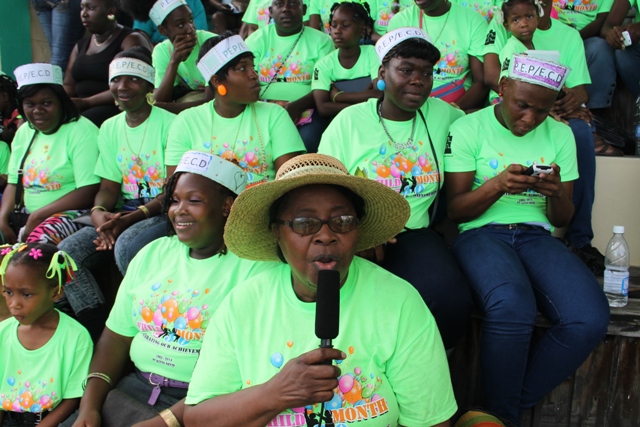 “We do give our support and as I said before we are indeed pleased to be a part of the celebrations. I am very happy with the crowd turnout, the parents, the children of the day-care and the nurseries, the early childhood centres. Indeed, it’s really a proud moment and I want to say congratulations to all and continue celebrating 30 years of achievement and successes with the Early Childhood Unit,” she said.
Vanta Walters, former Coordinator for early Childhood Development in St. Kitts and Nevis for over 20 years, led a delegation from St. Kitts to participate in the Child Month Parade on Nevis and spoke of her contribution to Early Childhood Development in the Federation.
“I am now retired and the early Childhood Unit is celebrating 30 years of Child Month and you may or may not know, that I presided over 20 of those 30 years and I am, I should say, along with the team that I had at the Unit at the time, was responsible for bringing the celebration of Child Month to the level where it’s at.
“Now I am retired but was called out of retirement by the Management of the People Empowerment Programme [PEP], to train a group of ladies who expressed interest in working in Early Childhood either to open their own centre or working in a government or private centre,” she said. 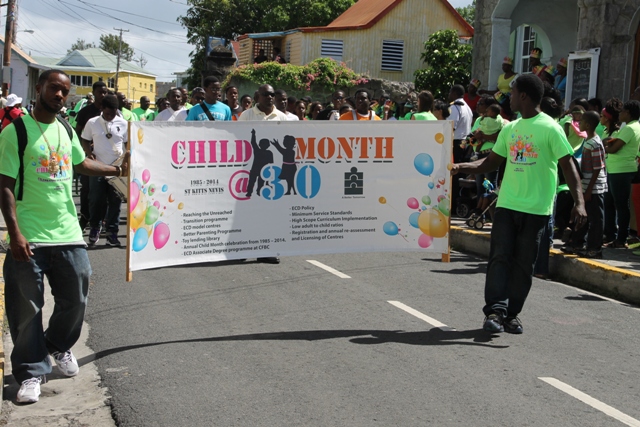