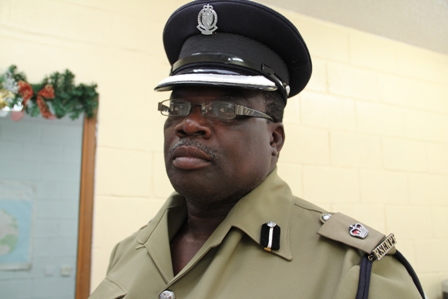 He made the call when he delivered remarks at the Nevis Division’s New Year’s Programme 2012 on January 04th. The annual event took place at the Charlestown Police Station’s Recreational Centre.

While the Senior Officer invited those present to recite their Oath of Allegiance and to renew their pledge of service, he attributed the recent successes of the Division in crime detection to the three-year Policing Plan for 2009-2011 themed “Safer Community through Partnership”.

However, according to Superintendent Brandy, Part of 2011 brought changes to the Police Force including the Nevis Division. The changes he noted begged two important questions whether those changes good or bad? Or would they be accepted or resisted? 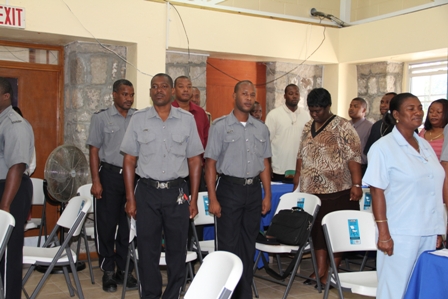 Mr. Brandy said although it was easier for many to resist rather than accept change, he pointed to the Strategic Planning Group which he believed was an outstanding example of change which had greatly benefitted the Division since its inception.

“The Strategic Planning Group is a real good example of change that could have been stressful both for the Senior Ranks and Sergeants of the Division. The creation of teams which crosses the hierarchal lines has the potential to be stressful in a military style organisation, where the base mode of operation is top down.

“The key point is that by thinking how Policing was done in Nevis and creating a team approach, by being informed and getting work done, a lot was accomplished. Crime may not decrease as much as we would like and the detection rate may not be as high as we want but I remain confident that much of the good performance of the Nevis Division was the result of the introduction of this team. So therefore, let us accept change and accept positively the efforts to improve policing,” he said.

Notwithstanding, Divisional Officer thanked those stationed at the Nevis Division for their hard work, dedication and having gone beyond the call of duty over the past years.

He told the officers that as they began the New Year with demands and duties of the Division and the Organisation, they should be mindful that not only would it bring opportunities but also challenges which they had to face boldly. 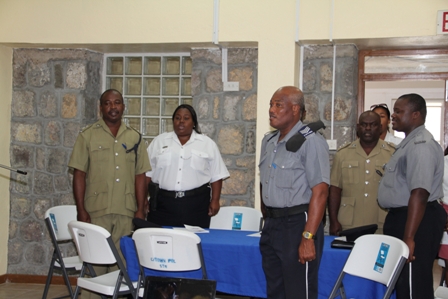 “Let us remember our mission statement with confidence and pride we will enforce the law without fear or favour, malice or ill will. We will prevent crime. We will pursue and bring to justice those who break the law. We will endeavour to assist and ensure all residents and visitors alike. We will do the best in our ability to do all things with integrity and impartiality,” he said.

In conclusion the Superintendent quoted British poet Edith Lovejoy from his book entitled “Opportunity” in which she who penned “We will open the book of 2012, its pages are blank. We are going to put words on them ourselves.”  The book’s first chapter begins with “New Years Day”.