Premier of Nevis Hon. Vance Amory (r) and Dr. David Doyle, St. Kitts and Nevis Permanent Representative to the United Nations Educational, Scientific and Cultural Organization at the Premier’s office, Pinney’s Estate on April 11, 2017
NIA CHARLESTOWN NEVIS (APRIL 12, 2017) — Premier of Nevis Hon. Vance Amory, applauded the work of Dr. David Doyle, the Federation’s Permanent Representative to the United Nations Educational, Scientific and Cultural Organization (UNESCO) based in France and Honorary Consul, for bringing international attention to the history and heritage of St. Kitts and Nevis.
Dr. Doyle met with Premier Amory at his Pinney’s Estate office on April 11, 2017. He later met with the World Heritage Committee, the group spearheading the Nevis Island Administration’s (NIA) efforts to get historic Charlestown listed as a World Heritage Site by 2020.
He said the Federation’s UNESCO Representative has been assisting the committee in mapping its way forward and the critical issues they have to deal with to accomplish the stated goal.
In response, the UNESCO Representative said his visit was an important one in which he would brief the dedicated committee on both the technical and administrative they would need to undertake over the next 2-2 ½ years with very clear and tight deadlines.
“We need to make sure that we prepare a structured and very well prepared submission for the city of Charlestown which has an enormous number of heritage benefits, notably Alexander and other related historical characteristics.
“Going forward, we are going to be looking to raise funding over the next couple of months to bring in a number of experts to work alongside us, in helping us and mentoring us, in terms of the very substantive dossier we need to put together between now and February 2019, potentially, for a decision in June 2020,” he said. 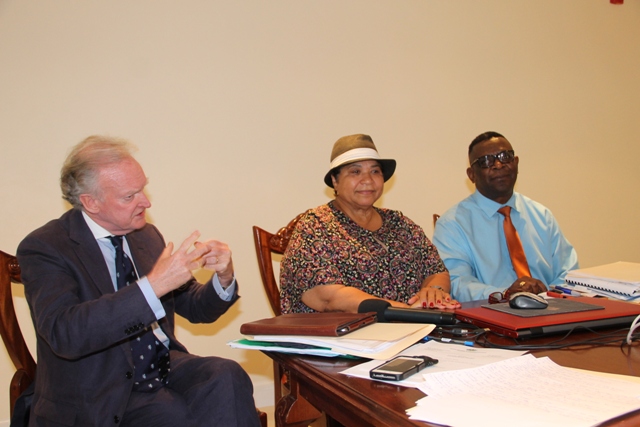 Meantime, Dr. Doyle also addressed an unrelated matter pertaining to tourism while on Nevis. He pointed to a group of French golfers who would be visiting Nevis in December for the fourth year in a row on a golf cruise.  He said they play golf at the Four Seasons Resort and return with great enthusiasm every year.
Dr. Doyle said the visit is one of many activities and initiatives undertaken in a bid to raise the profile of Nevis as a tourism and a golf destination.
At the end of his meeting with Mr. Amory, a thankful Mr. Doyle said he looked forward to continuing discussions going forward.
While on Nevis he also met with Hon. Mark Brantley, Minister of Foreign Affairs and Aviation in the Federal Government.
Before his departure from Nevis, Mr. Doyle made a presentation at a STEP (Society in Trust in Estate Practitioners) (Nevis) Professional Development Seminar at the Red Cross Building in Charlestown.
Mr. Doyle was accompanied on his visit to Nevis by Mr. Antonio Maynard Secretary General of the St. Kitts and Nevis National Commission for UNESCO.