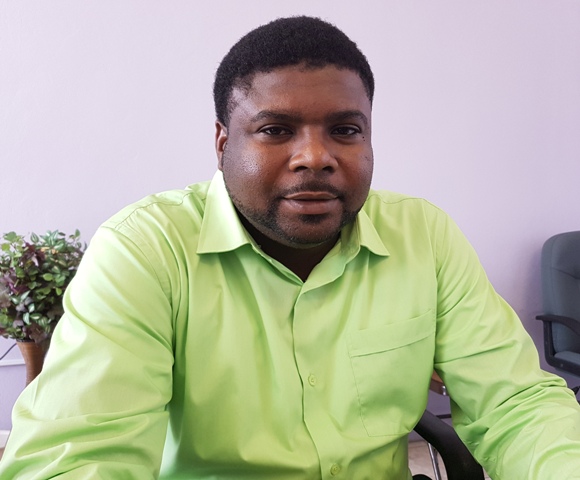 Hon. Troy Liburd, Junior Minister in the Ministry responsible for Public Utilities on Nevis
NIA CHARLESTOWN NEVIS (APRIL 11, 2017) — The Nevis Island Administration is taking the matter of persistent water disruptions seriously and is seeking to bring the situation to a speedy state of normalcy.
Hon. Troy Liburd, Junior Minister in the Ministry responsible for Public Utilities gave the assurance on April 11, 2017, when he spoke to the Department of Information. He said they have been in constant contact with Bedrock Exploration and Development Technologies (BEAD) and are working to remedy the situation which has affected consumers on the island since last year September.
“This situation with the water has been the single highest priority for the Ministry and it is a very high priority for the government. It is not something that we are taking lightly.
“Water, of course, is the most basic thing. We need water for hygiene, we can’t live without water, so it is something that we are taking very, very seriously… We have been working with the company BEAD. They are the ones who operate the well…up to this morning, I spoke with the Chief Executive Officer of BEAD and he is assuring me that we are going to have a solution to that problem shortly,” he said.
The problems stemmed from a failed pump at the Maddens Heights pumping station owned by BEAD. They had been contracted by the NIA in the past to provide a certain quantity of water. The pump which is one of two owned by the company, generates the largest amount of water on the island at 360 imperial gallons per minute.
The well is more than 400 feet below ground and Mr. Liburd said the Ministry has also been looking into longer term solutions to remedy the situation. He expressed hope that they would be expedited and implemented but for the time being they continue to work with BEAD.
Apart from the failed pump, Mr. Liburd spoke of other issues which he said compounded the water disruptions.
“The Water Department is having to deal with the fact that they have lost a significant amount of supply.
“We are dealing with the fact that it is the dry season. We have had to deal with the fact that for significant stretches, the Four Seasons has been full and have been pulling quite a bit of water,” he said.
As a result, the Department has introduced a ration and rotation system. The water supply is turned off from 10 p.m. till 4 a.m.in certain strategic areas to allow the reservoirs to accumulate water. That way water is available in the mornings.
He used the opportunity to applaud the Nevis Water Department for its sterling efforts during the water challenges.
“The Water Department have been doing a tremendous job. These guys are out whole day and sometimes they are out all night… but this is our top priority and so whatever is to be done will be done,” he said.