Cabinet Secretary Mr. Ashley Farrell at the official opening and handing over of the police barracks at Bellevue.

Mr. Farrell, in front of a large and appreciative audience, described Premier Parry as “a man with vision, determination, great focus [and] astute leadership.”

The Cabinet Secretary’s remarks were further strengthened when Ambassador of the Republic of China to St. Kitts-Nevis His Excellency Miguel Tsao recorded what he described as “sincere admiration” to the island’s Premier.

In speaking specifically about the leader’s role in the construction of the recently opened barracks, Mr. Farrell said “he had the will to follow through.”

“He [Hon. Joseph Parry] therefore set about the necessary resources to make police barracks at Bellevue a reality. He is, in many respects, a pioneer,” Mr. Farrell lamented while His Excellency Tsao was quoted as saying “Mr. Parry remained dedicated to the benefit of all the citizens of Nevis.” 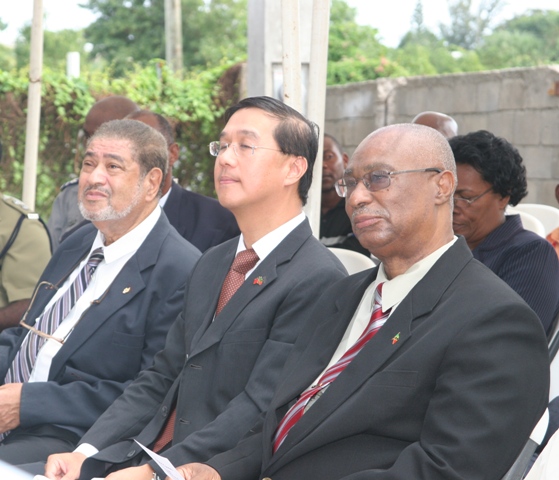 (l-r) Deputy Governor General His Honour Eustace John, Ambassador of the Republic of China to St. Kitts-Nevis His Excellency Miguel Tsao and Premier of Nevis the Honourabl;e Joseph Parry.

“I may say that without his presence here and the tireless job and effort, the completion of this police barrack could not have been a reality,” His Excellency Tsao explained.

Praises continued to be showered on the island’s Premier whose work, according to Acting Commissioner of Police Mr. Stafford Liburd, “was critical as the police advanced their position of improving the welfare of officers in the Nevis Division.”

“On behalf of the other officers in Nevis I will say that this [the building] was well done [and] was well received,” Acting Commissioner Liburd said.

Advisor to the Premier Mr. Llewellyn Parris and Permanent Secretary in the Premier’s Ministry Ms. Angelica Elliott were also lauded for their instrumentality in the construction and official opening of the police barracks while the St. Kitts and Nevis Trading and Development Company Limited [TDC], represented by General Manager Mr. Ernie France, was applauded for outfitting the building with furniture for the day’s ceremony.

During his address, Premier Parry extolled the NIA’s gratitude to the Government of Taiwan for providing financial assistance for the construction of the police barracks as well as a number of other projects on Nevis. 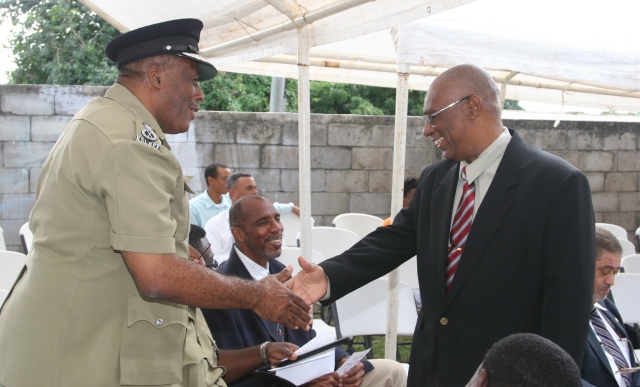 Acting Commissioner of Police Mr. Stafford Liburd welcoming Premier of Nevis the Honourable Joseph Parry to the opening of the police barracks.

“To the Ambassador of Taiwan, thank you very much for the investment of your country. Ambassador Wu [former Taiwanese Ambassador to St. Kitts-Nevis] was very very helpful. The government of Taiwan is very positive and you went a step further: you offered to provide us with cameras and when we didn’t have the money to buy the equipment that will operate the cameras, you also offered that money,” Mr. Parry explained.