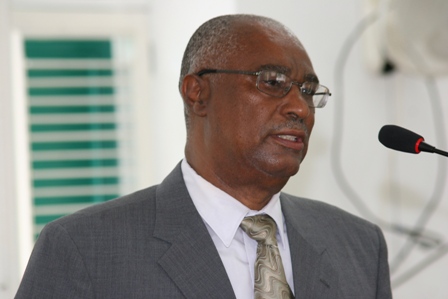 Premier of Nevis, Hon. Joseph Parry
Charlestown, Nevis  (Thursday, November 11, 2010) – Nevis Premier, the Hon. Joseph W. Parry, tabled a Resolution into the records of the Nevis Island Assembly on Tuesday to laud the efforts of all Nevisians who have played a role in making it possible for Four Seasons to reopen on December 15th.


Premier Parry declared that, “through the hard work and dedication of this Administration working in collaboration with the Resort, a resolution to the impasse which threatened the economic well being of Nevis has been worked out and the Resort is set to be reopened on the 15th day of December, 2010.”

He said that, “this Assembly hereby records its great appreciation of the efforts of the Resort and all of those who made positive contributions to the reopening and pledge our continued support to the Resort, hoping that it will continue to serve the Nevis economy well, for years to come.”

The Resolution received commendations from the Members of the Assembly representing St. John, St. Paul, and Junior Ministers Hon. Cozier and  Hon. Powell.

“For weeks on end an Opposition Member claimed that all Parties on Nevis wanted to see the Four Seasons reopened but I am very disappointed that not a single member of the CCM could find the time to attend the important sitting to place on official record, their appreciation to the people of Nevis who have been working so hard over the past few months to get the Four Seasons ready for its first guest on December the 15th. It is a real shame, declared Premier Parry.”

All members of the Opposition, Concerned Citizen Movement (CCM) leader Vance Amory, Mark Brantley, and Jean Harris were absent during the debate of the Resolution.

In May, Wachovia Bank through its local vehicle, St. Kitts-Nevis Resort LLC, purchased the Resort property after an attempted involuntary bankruptcy case failed two weeks prior in the USA. Coupled with ongoing negotiations with the Four Seasons brand, the May purchase paved the way for the swift reopening of the hotel, which is scheduled for December 15th.

Several magazines published in North America are promoting a ‘rediscover the Four Seasons’ (longer stay) package at the Resort commencing on December 15, 2010 and direct airlift from the American Airlines hub in San Juan, Puerto Rico to Nevis are scheduled to resume on December 16th.