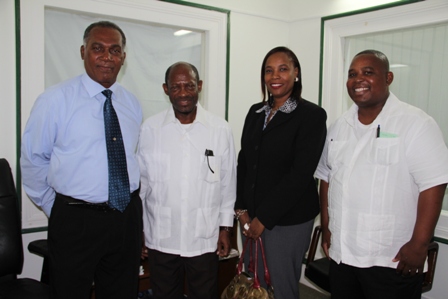 (L-R) Premier of Nevis Hon. Vance Amory, Prime Minister of St. Kitts and Nevis the Right Hon. Dr. Denzil Douglas, Financial Secretary Hilary Hazel and Comptroller of the St. Kitts and Nevis Inland Revenue Department Edward Gift
NIA CHARLESTOWN NEVIS (January 24, 2014) — Prime Minister of St. Kitts and Nevis the Right Hon. Dr. Denzil Douglas led a three-member delegation when he visited Premier of Nevis Hon. Vance Amory at his Bath Plain office on January 24, 2014.
The delegation which was made up of Financial Secretary Hilary Hazel and Comptroller of Inland Revenue Edward Gift came to Nevis to discuss immediate assistance and to tour the Treasury Building which was gutted by fire one week to the day.
Mr. Amory thanked the Prime Minister for his visit and gave the Department of Information an insight into what took place during the meeting.
“I want thank the Prime Minister for coming over this morning to look at the site of the Treasury fire. His mission was to meet with me so we could talk about the effect that this devastation has caused.
“We were able to discuss some of the issues which are the effects of that fire and to look at some of the ways in which we can begin to restore the services because clearly, we cannot now restore the building itself but to restore the service through the support of the Federal Government and by having the provision of some equipment and some of the furniture. We discussed other things, how we can get the Treasury services totally established over time,” he said.
The Premier also spoke to the progress made so far with regard to the reinstatement of services and the relocation of the Government offices that were affected by the fire. 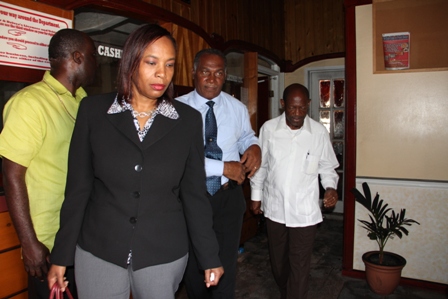 “What we started this week was the operations of the cashiers being housed in the Post Office to provide that service to those who have to pay their taxes. We are still searching for a permanent or temporary replacement of accommodation.
“We had thought that we would have the Credit Union building but that seems not to be coming to fruition but the staff at the Ministry of Finance and Treasury, have in fact made some other arrangements and we shall advise the public within the next couple of days exactly where we shall be locating the services or the operations of Treasury and Inland Revenue,” Mr. Amory explained.
The delegation was later taken on a tour, with Premier Amory, of the burnt Treasury Building and the temporary relocation of the Inland Revenue cashiers at the Charlestown Post Office before their return to St. Kitts.