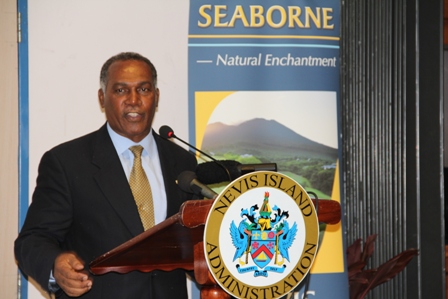 Premier of Nevis Hon. Vance Amory delivering remarks at a ceremony commemorating Seaborne Airlines’ inaugural flight to Nevis at the Vance W. Amory International Airport on January 22, 2014
NIA CHARELSTOWN NEVIS (January 23, 2014) — Premier of Nevis Hon. Vance Amory thanked Seaborne Airlines for accepting an invitation by the Nevis Island Administration (NIA) to add Nevis to its route.
Mr. Amory was at the time delivering brief remarks at a ceremony held at the Vance W. Amory International Airport on January 22, 2014, in commemoration of the Airline’s inaugural flight to Nevis just one week before on January 15.
“I want to say, that I am indeed very, very happy that we are here today to welcome, officially, Seaborne… I want to welcome Seaborne for accepting our partnership, to ensure that Nevis again becomes an active place to ensure our people have proper airlift, direct airlift and to thank you very much. May God bless this endeavour and prosper your efforts and our efforts as well in this partnership,” he said.
The Premier also expressed the view that the added airlift would create other possibilities for the people of Nevis.
“What this is doing for us is providing some possibilities which are important for all the people of Nevis. The nightmares which our people have had travelling by boat to St. Kitts to make connections, I think is at an end and I want to encourage, as I have said to our people, that we need to have direct access and Seaborne Mr. Ritzi and your team, you are doing a great job for us and I want to thank you from the bottom of our hearts for accepting our invitation to come,” he said.
Mr. Amory added that the new airlift would also help to stimulate tourism and tourism-related activity at the airport, something that had been wanting for some time. He noted that it was a move that would benefit the people of Nevis.
“We will see the increase in visitors. We will see activity here at this airport which will benefit every single person in this country. We say tourism benefits all and the persons who used to sit in their taxis waiting and wishing and hoping, I think that waiting and wishing and hoping will be at an end as Seaborne takes off and begins to increase its activity here in Nevis,” he said. 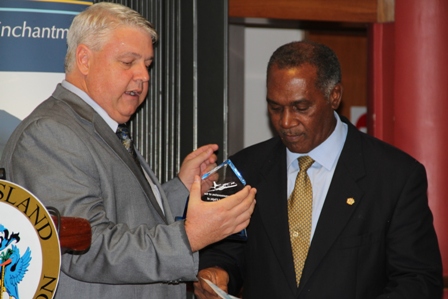 Notwithstanding, Mr. Amory admonished those who worked at the Airport to carry out their jobs in a manner that would lure visitors to the island.
“It will require from those who work at this airport that they provide the best service to ensure that Seaborne and the people who come here get first-class service but I want to encourage those at Immigration, those who are working with the Government, that they provide the most courteous service possible because we are a hospitable country.
“Those who are at the gate of receipt, as it were, the Immigration officers, those who are tending the aircraft, you have to show the people who come here and those who are leaving, that they have come to the best destination in the Caribbean,” he said.
Mr. Amory also used the opportunity to thank Greg Philip, Chief Executive Officer of the Nevis Tourism Authority, for his efforts; the General Manager of the Four Seasons Resorts, Nevis Sven Wiedenhaupt for his Partnership and efforts in attracting the new airlift to Nevis.