Director of Business Development with Seaborne Airlines Michael Ritzi
NIA CHARLESTOWN NEVIS (January 24, 2014) — Director of Business Development with Seaborne Airlines Michael Ritzi told Nevisians that the airline which began operations on Nevis from January 15, 2014, was a viable travel option with an impeccable safety record.
Mr. Ritzi’s made the claim when he delivered remarks at a commemoration ceremony at the Vance W. Amory International Airport on January 22, 2014, for the Airline’s inaugural flight to Nevis.
“We are the only regional airline that has a lounge in San Juan that offers free coffee, offers free Internet and also offers free cable satellite tv. We have been voted the best small carrier since 2007 and we are no longer going to qualify for that because we are no longer small. 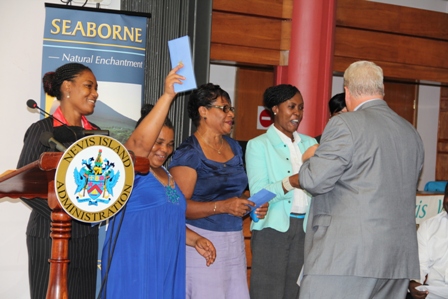 “The other thing that is very important that you understand about Seaborne is that we are a part 121FAA carrier. What that means is that we have to follow the same guidelines of training, maintenance and everything that American, Jet Blu, Delta have to follow and because of that we have an excellent safety record. Twenty years with no incidents,” he said.
Mr. Ritzi who gave five unsuspecting members of the public at the ceremony a free ticket that would take them to Puerto Rico and back to Nevis, also told the public that they should spread the word about the new airline operating in Nevis.
“After today I don’t want Seaborne to be a stranger, there are enough of you here. Word of mouth means everything. Please tell your neighbours, your friends.  If you are a business owner, please let people know that Seaborne is here. Like any business we need to put people in the seats. We do not want to be a carrier that only does seasonal.
“We made a commitment to be coming to this island seven days a week, 365 days a year. In order to do that Seaborne will need your help so I ask anyone who is in the media, anyone who owns businesses or anyone here, please tell your friends and family about Seaborne Airlines,” he said. 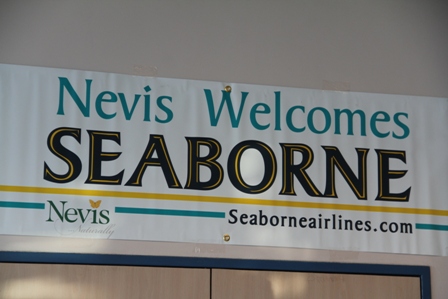 According to the Seaborne executive, the Caribbean-based airline offered a dependable service with a 98 percent completion record. At present he noted that they were doing 1,800 flights a month which was expected to increase by April 2014 to 2,600 equivalent to a 45 percent increase.
“We have a dependable service and we have a 98 percent completion record. Currently Seaborne has about 1,800 flights a month and by April it goes up to 2,600, that’s a 45 percent increase,” he said.
Mr. Ritzi also spoke to the lower rates that were being offered to Nevis.
“We are providing your local community with reasonable rates, dependable service and quality service and I am going to tell you one thing. Being Caribbean makes the difference because we are currently offering $99 one-way tickets to San Juan and I made a phone call today and told them to lower that price. 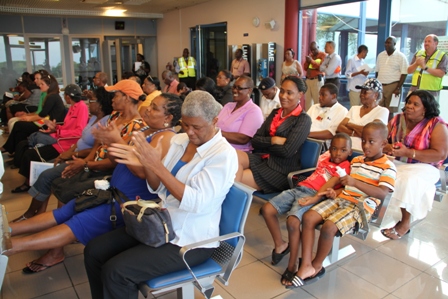 “Seaborne connects SJU San Juan International Airport that gets 12,500 passengers per day that come into that airport from 25 major US cities. We connect those passengers to take them to great destinations like here in Nevis and this will have a positive impact on your economy,” he said.
The Seaborne executive also used the opportunity to thank all who made it possible for the Airline to include Nevis on its route among them Premier of Nevis Hon. Vance Amory, Deputy Premier and Minister of Tourism Hon. Mark Brantley, Chief Executive Officer of the Nevis Tourism Authority Greg Phillip, Manager of the Vance W. International Airport Stephen Hanley and Director of Handling Agents TDC Ernie France.