Premier of Nevis, the Hon. Joseph Parry at the saluting dias
Charlestown, Nevis–(Thursday, September 1st, 2011) Premier of Nevis, the Hon. Joseph Parry was among a list of invited guests and dignitaries who witnessed the historical ceremony of the Passing of the Baton from Former Police Commissioner Mr. Austin Williams to his successor and newly instated Police Commissioner of St. Kitts-Nevis, Mr. Celvin G. Walwyn.  The ceremony took place at Warner Park on Wednesday afternoon.

Following the ceremony, Premier Parry was among those who gave a Toast at the Police Training Complex, to mark the transfer of the leadership. Premier Parry made brief remarks and spoke to the symbolism of the occasion.

“The symbolism and the act of passing the baton is a demonstration of continuity. This symbolism has significance beyond today and the security forces, it also represents the fact that life continues,” commented the Premier.

Mr. Parry also told the gathering that it was a time to quickly review the changes and the progress made as a Nation over the past 28 years.

“We have achieved much and we have reason to be proud as a people.   Any progress that we have, had to be achieved as a result of good leadership, confidence of our people and the presence and serenity contributed by the hard working men and women in uniform,” Premier Parry stated. 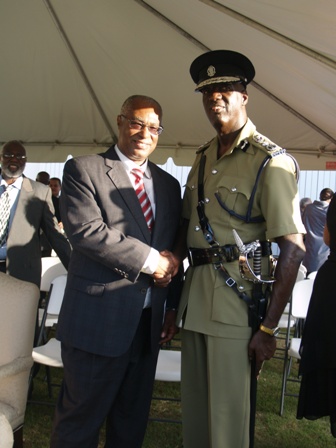 He commented that there were many challenges that St. Kitts-Nevis continued to face as a growing nation and that change and progress had never came quietly to any country.

The Hon. Joseph Parry noted the importance of recognising the challenges which the people of the Federation have, is the courage, determination and initiative to overcome.

The Premier concluded, “I place my support and the support of my Administration on Nevis, fully behind the efforts of the Government here on St. Kitts.  I give my fullest support to the Security Forces especially the new Commissioner of Police.”

At the Passing of the Baton earlier which was chaired by Sergeant Stephen Hector, outgoing Commissioner Williams along with incoming Commissioner Walwyn inspected several Units of the Royal St. Christopher and Nevis Police Force who were on parade.

Mr. Williams later delivered his farewell address as Commissioner. It was followed by the introduction of new Commissioner Walwyn by Florida Police Sheriff, Mr. Jerry L. Deming.  Then some stirring brief remarks were followed by Mr. Walwyn, who informed the gathering that “Business as usual, is over!”

Minister of National Security, Hon. Sam Condor assisted in passing the Commissioners Baton as Mr. Walwyn topped off the ceremony with a general salute. 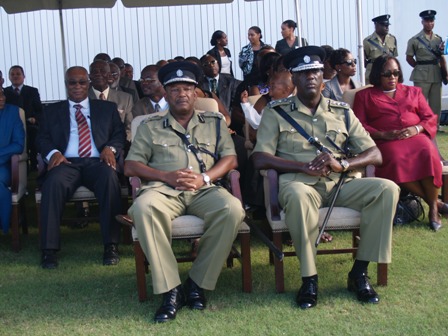