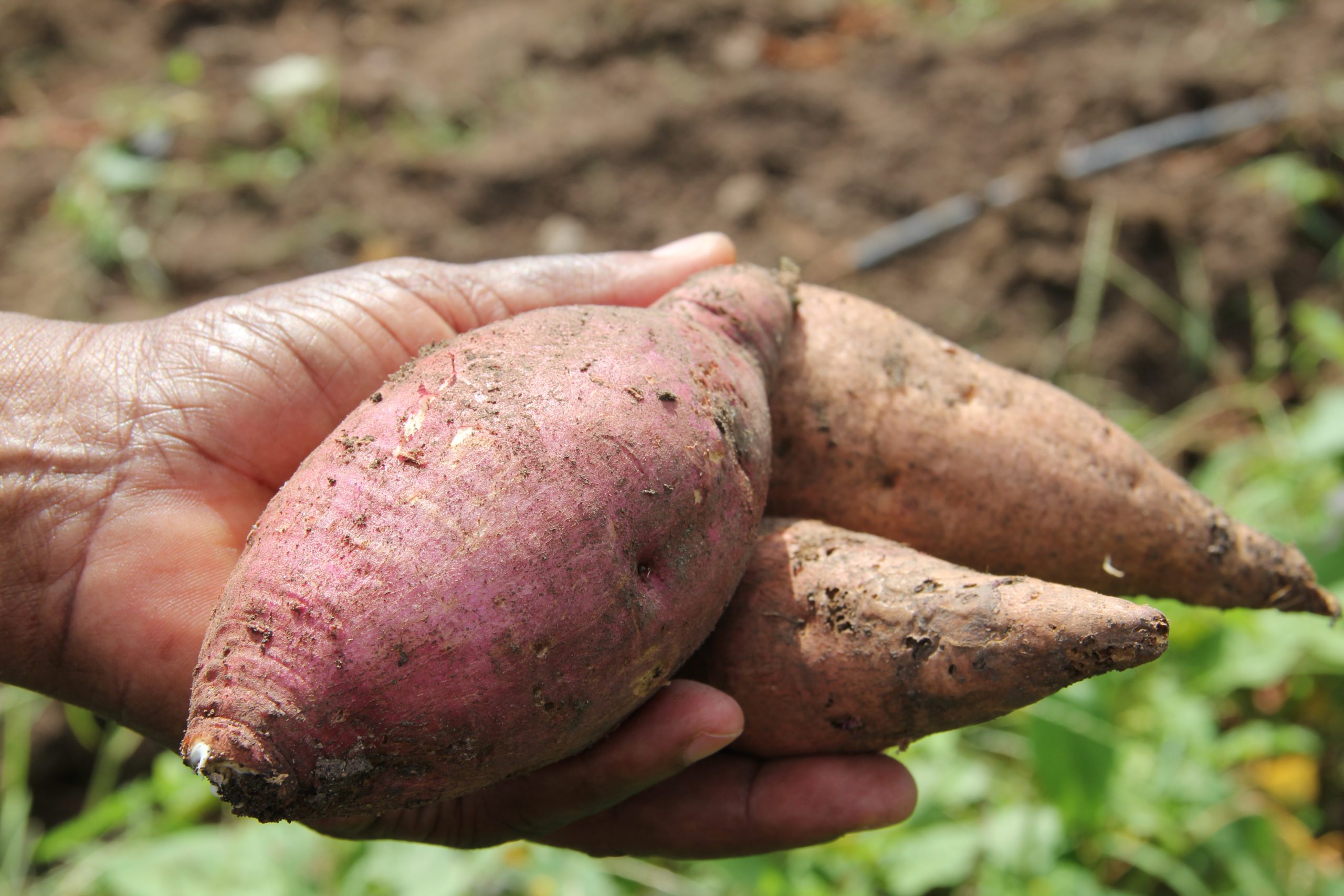 NIA CHARLESTOWN NEVIS (February 08, 2022) — In its continued pursuit of food sustainability on Nevis, the Ministry of Agriculture through the Department of Agriculture, is so far recording successes in food production.

Mr. Huey Sergeant, Permanent Secretary in the ministry, says the success is based on the demand for crops cultivated on the government-owned farms.

“Peanuts has performed exceptionally well. The demand and quality is phenomenal. We are actually harvesting peanuts again because of the response… Even when the peanuts was still in the ground, we were in a process of accepting huge orders because of that demand. Many persons were happy at the quality that they would have received.

“We are on the road to continue the production of peanuts on the island. We would have produced four acres last year and that still wasn’t enough…We have huge demands for much of the product.

“Sweet potato is something that we are quite proud of. It’s a traditional crop, yes, but the volumes in which it was produced was significantly lower than what is demanded…We are exploring ginger. Ginger is in high demand as well,” he said.

Mr. Sargeant also spoke on the growing demand for sorrel.

“The sorrel that we planted performed well, in that there is a demand for sorrel not just in the festive time but throughout the year. So we’ve embarked in Indian Castle in particular to do sorrel… We have sorrel down to as far as June based on our crop scheduling.

“We have three types of sorrel… We have pink sorrel; we have dark red that is black at the tips; and then we have what we call a white sorrel which is actually green, and all of them they’re doing quite well,” he said.

He noted there is also the demand for soursop and in order to keep up with the demand at the Nevis Agro Processing Centre, the department had to resort to cultivation on a commercial basis.

They are also cultivating beets, carrots, and other crops the farmers tend not to want to do and greenhouse sweet pepper.

Mr. Sargeant spoke to the progress at the government-owned farm at Indian Castle Estate where the focus is on tree crop cultivation.

“We would have planted in excess of 7,000 tree crops… We have citrus; we have cassava; we have over 4,000 coconut trees planted; we have mango; we have pomegranates; we have a lot of the crops that we found were not being heavily produced on the island in terms of tree crops.

“We explored sugar cane. We have passion fruit and so on… We have exotic things like the cane fig for example; we have soursop,” he said.

According to Mr. Sargeant, the imported coconut plants are progressing satisfactorily.

“The performance has literally been phenomenal of those coconut trees. I think…it’s 18 months before they start producing,” he said.

The trees, which were imported from Guyana, were brought to Nevis primarily to capture the jelly water market, primarily to reduce cost and provide a fresh product to consumers on Nevis, Mr. Sargeant explained.

“We realise people have become a lot more conscious, and they are consuming a lot of jelly water. Sadly, the jelly water that is consumed, all of it is imported… so by the time they get here the shelf life is almost to the end of it.

“If we can get jelly produced on Nevis, that freshness is certainly an advantage. Hopefully, because it’s produced on Nevis and the transportation costs associated with jelly water now is going to be eliminated. We are doing all of this investment so that later on we can actually see a decrease in cost to the consumers,” he said.