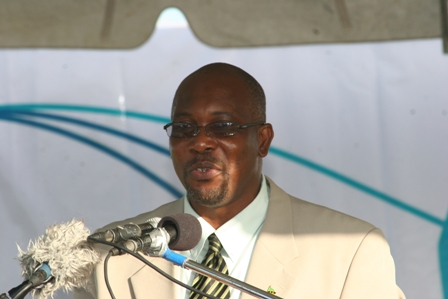 Minister responsible for Renewable Energy and the Environment on Nevis Hon. Carlisle Powell at the official launch of the WindWatt (Nevis) Ltd. Wind Farm at Maddens

CHARLESTOWN NEVIS (September 02, 2010) — Minister responsible for Renewable Energy and the Environment in Nevis Hon. Carlisle Powell, said the Nevis Island Administration (NIA) was pleased to support the efforts of WindWatt who brought the Maddens Wind Farm to life in 2010. He made the comment on Friday, at the official launch of the first ever wind farm commissioned in the Organisation of East Caribbean States (OECS).

Mr. Powell said the project would provide jobs for Nevisians, a reliable supply of wind energy, cheaper electricity and a reduction in fuel surcharge and the use of imported oils.

“We are celebrating today because WindWatt has successfully installed and commissioned these eight turbines and have been producing electricity and sending it to the grid since July 21, 2010.

“While the world is focussing on ways to reduce the carbon footprint and increasing our energy production through the use of alternative energy, we in Nevis will not be left behind,” he said.

Mr. Powell explained that America and Europe encouraged the expansion of Alternative Energy from geothermal, wind, solar, clean coal technology, hydro and ocean currents. However, in the Caribbean many years had been spent in discussion about sustainable energy production but very little action had been realised. 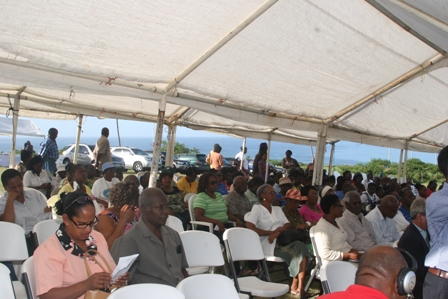 A section of the public in attendance at the official launch of the WindWatt (Nevis) Ltd. Wind Farm at Maddens

He said in Nevis, there was proven geothermal resource, the sun and wind. According to the Minister, wind was used 300 years ago to provide energy to power machines on sugar estates which manufacture sugar and wondered why it has taken that long to tap into that particular renewable resource.

“Today marks the day when we open this Wind Farm at Maddens and Nevis again leads the way,” he said.

The Minister noted that when the idea of the wind farm was conceived in 2007, it did not take much to convince him that wind energy was an idea which he was happy to welcome to Nevis.

He said it then became his duty to convince Premier of Nevis Hon. Joseph Parry and his Cabinet colleagues, that wind energy was feasible in Nevis and it was possible to negotiate an agreement in which all the cost would be borne by the owners and the Nevis Electricity Company Ltd. would only have to purchase at a fixed cost.

“I am happy to say to you that our presence here today is blessed assurance that the government saw the wisdom of supporting the wind farm and gave it its blessing to move on the way.

“Even as the turbines begin to spin, I say that many persons told us that a wind farm was risky…people questioned why this government was taking the chance of public ridicule if the project failed but I remind you that this government is and never was afraid to explore new areas, that is why we supported the wind farm,” he said. 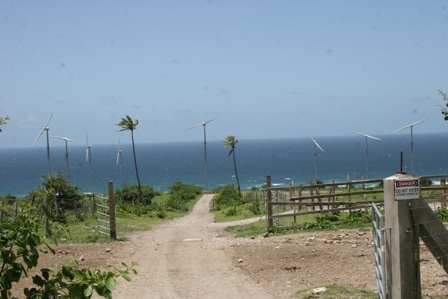 Turbines at the WindWatt Wind Farm at Maddens

Mr. Powell said because the NIA was not fearful of exploring new areas, it become fully involved in the Geothermal Project which will bring benefits to the island and people of Nevis. Also they contracted BEAD to drill for water where it was thought there was no water and was rewarded with over 1million gallons of new water per day from new sources.

He said all of those projects were undertaken because the NIA was interested in the quality of life of the people of Nevis, which would provide for greater peace, progress and prosperity.

The Minister also used the opportunity to recognise the efforts of Hon. Patrice Nisbett the then Legal Advisor to the NIA and had since been elevated to the position of Attorney General of St. Kitts and Nevis, for his outstanding role in guiding discussions on the Contract and Power Purchase Agreements. Permanent Secretary in the Ministry of Renewable Energy and the Environment on Nevis Mr. Ernie Stapleton was also publicly commended for his outstanding professional services and devotion to duty.

Photo caption: Minister responsible for Renewable Energy and the Environment on Nevis Hon. Carlisle Powell at the official launch of the WindWatt (Nevis) Ltd. Wind Farm at Maddens