(CHARLESTOWN, NEVIS–Tuesday, August 31st, 2010) Premier of Nevis, Hon. Joseph Parry said he was proud that Nevis was again the first in the Eastern Caribbean …this time with a commercial Wind Farm.  He made the statement at the opening ceremony of the WindWatt Wind Farm at Maddens Pasture on Friday.

“I must tell you that Nevis was first with everyone being exposed to Secondary Education.  Nevis was also first to have a total land reform programme and the first with the Nevis Model which linked agriculture and tourism. It became the model for other Caribbean islands and Latin America,” said the Premier.

The Hon. Joseph Parry expressed hope that the young people would understand that although Nevis was small, the island had been a leader among the Caribbean islands, a demonstration of the island’s leadership ability.

During the Premiers address, he reflected on how the early Nevis Reformation Party (NRP) team worked hard to get electricity in Nevis. In 1980, Nevis only had 650 kilowatts of power and for that reason the island did not have a good daily supply of electricity island wide.

The NRP then brought in a generator which doubled the supply of electricity on the island and every household that was electricity ready was able to receive a regular supply. 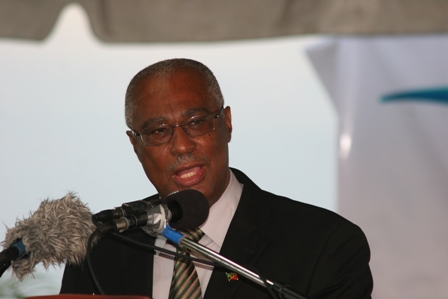 “Today, the movement is an earth shaking landmark, as we are turning on the power officially with the supply from the wind turbines into the electricity grid system.  We are pioneers and leaders because we care for our people and we hope to bring cleaner and a more dependable supply of electricity for the residents of Nevis,” stated the Premier.

The Hon. Joseph Parry made it clear that Nevis had to move from a fossil fuel dependency to an alternative energy supply because he explained that what happened in the rest of the world impacted the islands of the Caribbean, which Nevis was a part of.

The Premier said that recently, the world was looking at the East for change.  He said that no longer was the United States or Europe the super powers they were once ago. Now India and China are the economic moguls whose thirst for fuel is tremendous.

Change, the Premier said was important and Nevis had to find alternatives for an electricity supply because the price of oil will continue to rise and fall and Nevis would be the worst for it.

“Despite what the Opposition party may say.  The Nevis Reformation Party-led government can’t be denied that they have performed,” commented the Premier.

He urged residents of Nevis to not adhere to propaganda and misleading statements which came from the Opposition because it was known that those who were, “great at propaganda are poor at performance!”