NIA-CHARLESTOWN NEVIS (November 11, 2011) — Minister of Social Services on Nevis Hon. Hensley Daniel called on a group of single mothers to never give up on their responsibility to guide their children. His advice came while he delivered remarks at the annual Single Parents Support Group Parenting Workshop on November 09, 2011 at the Red Cross Building.

The one-day seminar was designed to encourage parents to spur confidence; develop good parent/child relationships; recognize the positive things they had been doing; encourage them to aspire to be the best parent they could be and to lend time and support which allowed them to think through different ideas on parenting. The program formed part of the Family Services Division of the Social Services Department in the Nevis Island Administration.

“Think of those things and think of the seriousness of the anti social behavior and we will be well on our way to making tremendous improvement in the development of our society,” he said.

The Minister noted that the Workshop had come at an opportune time when the tide of vice was rising and anti social behavior was adversely effecting the economy.

“Anti social behavior is hurting the economy badly, when you look with me at the cost of imprisonment, the cost of foster care, the cost of violent deaths, the cost of medication to treat injuries resulting from violence and in addition, the security guard industry which has to be employed by companies, the additional cost is passed on to the consumer.

“So by and large in our society today, we are as it were shooting ourselves in the foot because by this wave of anti social behavior, we are making life more difficult for all of us and so the workshop is timely,” he said.

Mr. Daniel said he did not accept that because they were single mothers they could unleash a criminal that would terrorize the rest of the community and the workshop was intended to remind them that they could make a difference   and had a responsibility to raise their children to be responsible citizens. 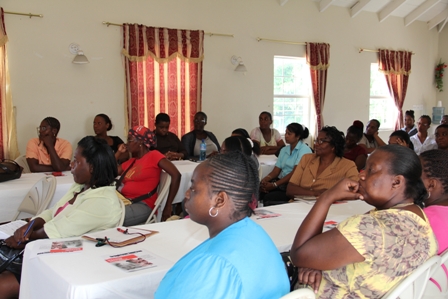 He said there were several persons on Nevis who were respectable members of the society and were products of single parent families and frowned on the idea that a single parent was a badge for misconduct and misbehavior.

The Social Development Minister noted, that it was known in Nevis that there were some young people, boys in particular, that it took a great deal of effort to manage and direct. However, he said the NIA had been considering making it possible for parents to be held responsible for their children’s misbehavior.

“I want to make sure that we head in the direction where we can charge the parents for the misbehavior and misconduct of the children. With that in mind, I believe most parents would be minded to make sure that their children, in particular, the boys are properly taken care of.

“It cannot continue as we have been doing, it will not be business as usual. We have to look at the legislation to pin and tie the hands of the parents to the infractions of their young sons,” he said.

Mr. Daniel explained that the society was being challenged by the bad behavior of a number of today’s young men and the workshop was also a reminder that the young boys in the community were very strange people.

“The challenge we have in our community, is that we somehow imagine that 40 and 50 years ago when we were made to behave ourselves that it was a wrong thing and that we should change. We don’t change things that have worked and if it is that stricter control of the young men in the country at an early age – 7, 8, 9 and 10 is necessary then so be it,” he said.

The Minister told the Single Parents that parents in married unions faced the same challenges as they did with today’s young people who were also confronted with challenges of a gun culture, pornography and mounting interest in many sexual engagements. He urged them to seek the services of the Social Services Department 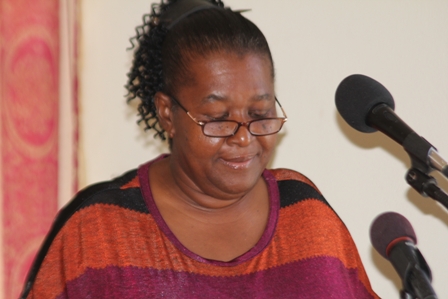 “However, because you are doing this tremendous work on your own, it must come to you as a greater challenge. I therefore suggest to you, that you use the services of the Social Services Department so that you can be helped. Do not remain with your son giving trouble for five years from Grade 4 up to Form 3 and then you are told he becomes a violent teenager heading to the gangs.

“Your responsibility is to intervene early and to stay tuned and all of the writers who suggest that we remain connected. Remaining connected means that we cannot continue to do the things we use to do. When we have children as we say locally the free paper is burned. We are no longer free to do the things we wish to do. We have to make heavy, heavy sacrifices in order to get today’s children back on track,” he said.

Parenting Mr. Daniel noted had become a science and suggested to the parents that they read the many books available in the libraries and at community centers with topics that addressed the challenges faced by parents handling today’s children.

“So make it your business to read what people are saying about your children, just to have a better appreciation for how to guide your children. I want to hope that this workshop helps us all in Nevis to contain anti social behavior [because] when we do so, we would be saving a lot of money.

With that in mind, Mr. Daniel told the Single parents it was important to guide their children on the right path since the large sums of 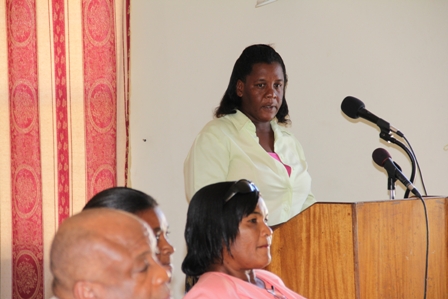 money spent on persons locked up in the prisons, could otherwise be diverted to other well needed projects on the island.

Other remarks at the ceremony were made by Coordinator of the Single Parents Support Group Mrs. Grace Manners, Ms. Josette Browne lead those present in prayer while a poem was delivered by Ms. Gloria Pemberton and the Vote of Thanks by Ms. Lydia Lawrence.

The presentations later in the day came from Ms. Andrea Bussue who spoke on The Effects of verbal Abuse on Children and Mr. Rawlinson Isaac who presented on the topic: Managing your Money in these Challenging Times.