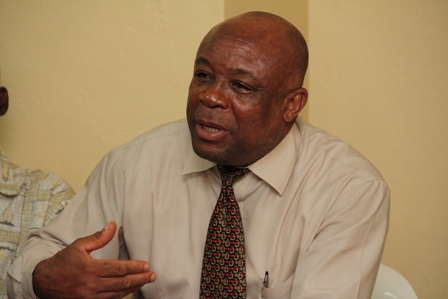 The Minister further told the graduating class at the old Brown Pasture Primary School that the Nevis Island Administration (NIA) through the Ministry of Social Development had provided the opportunity for participants to make a dollar which was more fulfilling to the Administration than spending a dollar.

Mr. Daniel told the students that their short course of studies in Plumbing and other training courses offered by the Ministry of Social Development was simply part of a larger picture of empowerment.

“The training is part of a larger programme for skill development. It is part of the larger concept of adult and continuing education…It is an attempt to improve the skills set in the country and as it were, sharpen the saw for social and economic advancement. 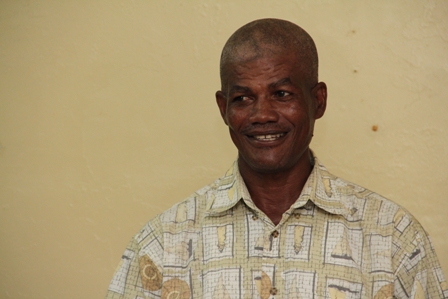 “When we think that we are in a recession, we are doing the right thing now because when the recession abates we are going to have a cadre of trained people who can either decide to save money by repairing their own faucets at home or they will set up their own businesses to provide plumbing service,” he said.

The Minister also disclosed that the Ministry was actively seeking to find accreditation for the course of studies being offered and that both intermediate and advanced courses were on the cards to be added.

He noted that the Ministry was actively seeking accreditation for the courses offered in Electrical Engineering, Plumbing and in the near future Blueprint Reading from educational institutions outside of Nevis. Computer Literacy has also been another area of training offered.

“As we continue to do these things, there are institutions which are willing to partner with us because we are not only going at the tertiary level but where people are doing university degrees and diplomas. We recognise in Nevis that one of the things that is absolutely necessary, is a large number of people with basic skills in carpentry, masonry and so on which would allow us to get some of the money that is available from some of the development projects,” Mr. Daniel explained.

The Minister also urged the participants to sell the idea of the training and to take advantage of the courses offered by the Ministry. 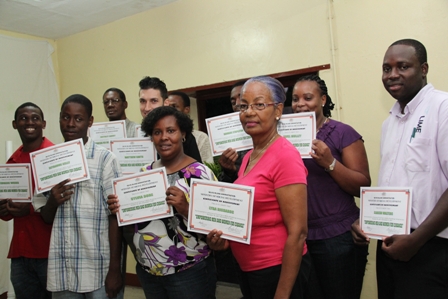 “In January and we are going to take these courses right around the country and we depend on you to share with the rest of Nevis and we depend on you to tell the other people how important it is to have this basic skill…this one (training) provided you with an opportunity to do something new and perhaps that is the best marketing approach we can use to get other people involved.

“So on behalf of the Ministry, the Permanent Secretary Mr. Pemberton who has been involved in the implementation, we are going to continue these courses. We want you to help us to sell the idea … that we are spending too much time at our homes consuming ideas that are being developed by other people. Let us use it to develop our own ideas,” he said.

Before ending the Minister publicly thanked the Course Tutor Mr. Alex Claxton and announced that it was not by accident that he recently completed a Bachelor of Arts Degree in Plumbing at the University of Miami.

“That training was funded by the Government and what we seek to do is to rein people and in turn they would transmit some of the knowledge to other people who are interested in that particular field of endeavour.

“If we get more of our people who are trained in the skills area to do just that we will be well on our way,” he said.

“These were done with students participating in regards to taking measurements filling up things. I had them really working to make sure they understood what was on the chalk board and not just to have the theoretical part of it and I am pleased the way that they have performed during the period we spent together.

“Not only that, they are more knowledgeable as far as reading a plan is concerned, understanding the scale, working out calculations with regards to the run of the pipe, the drop the fall and I think they are more knowledgeable as far as repairs are concerned.  That can be translated in that they will be able to save themselves some money, instead of having to call a plumber to do things they would not be able to do before,” he said.

Mr. Claxton referred to his students as a wonderful and very enthusiastic class and having spent six weeks training them they were all successful in the examination he had given to them.