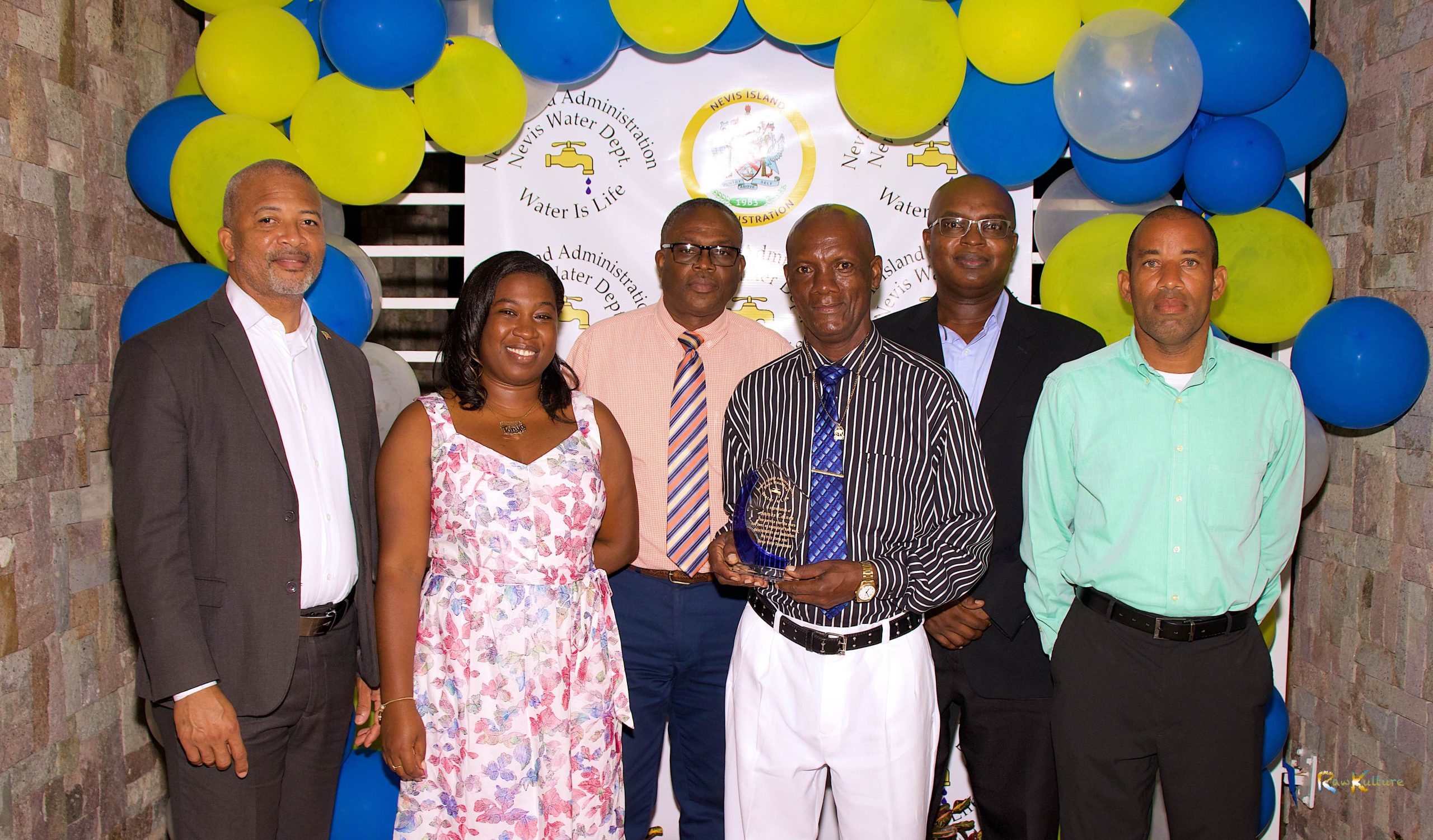 NIA CHARLESTOWN NEVIS (October 05, 2021) — The Nevis Water Department (NWD) honoured three of its retirees who have given collectively more than 100 years of dedicated service at a Retirement Cocktail celebration at the Nevis Performing Arts Centre (NEPAC) on September 30, 2021.

Mr. James “Tin Tin” Caines; Mr. Carlton “Cherry” Williams; and Mr. Conrad “Monks” Huggins were presented with plaques and tokens of appreciation by Hon. Spencer Brand, Minister of Water Services in the Nevis Island Administration (NIA) on behalf of the management and staff of the NWD.

Mr. Caines joined the Public Service in August 1977 and retired in May 2021 after giving 44 years of dedicated service.

He was employed under the NWD where he initially worked at Stoney Grove. In January 1999, Mr. Caines became the Maintenance Supervisor, a position he held till August 2021. During that time, he led teams engaging in work throughout the island.

He was appointed to the Civil Service on September 2001 and advanced in rank in the ensuing years to the position of Inspector of Works.

In 2014, the Caribbean Development Bank (CDB)-funded Nevis Water Enhancement Project commenced with the erection of a number of storage tanks and the installation of a 10-inch transmission line from Maddens to Camps Estate and on to Spring Hill.

Mr. Caines managed a team of workers on that aspect of the project. Other areas of the project he was involved in included the installation of lines from Stoney Hill to Fothergills, from Morgan Estate to Hamilton, and Spring Hill to Westbury and through to Cotton Ground.

He expressed gratitude to the Ministry of Water Services, and the Nevis Island Administration generally, for allowing him the opportunity to prove himself.  He is thankful for the experiences gained while working on many projects for the NIA.

Mr. Caines stated that his experience with the NIA has been a wonderful journey.  One in which he loved to serve and he enjoyed meeting people, interacting with them and assisting them.

Mr. Williams joined the NWD in 1989 as a Pump Operator at Fothergills and Zion and retired on September 20, 2021.

When he began working at the department only the Zion pump was operational then. There were no water tanks at Fothergills and the crews were required to work on a shift system with personnel from both the Zion Pump Station and at the Fothergills Booster Station. He would also accompany the production crews when a pump needed to be serviced.

He was described as a generally friendly individual, who expressed himself in an unorthodox manner when he believed the time is right; and a reliable worker who loved his job.

The other retiree Mr. Huggins, worked at NWD in a career which spanned 40 years. He joined the department in 1981 as a Maintenance Crew member, and retired in September 2021 as the Foreman of Works.

When he began the job, worked at the “Source” with the now-deceased William “Willynatta” Archibald.

In 1999 he was appointed in the Civil Service as a Maintenance Supervisor, an area in which he helped to train and work with new maintenance staff. In 2021 he was promoted to Foreman of Works, a position he held for 20 years until his retirement.

Mr. Huggins is described as one known for his exceptionally hard work and dedication in all areas he was assigned during his tenure. Even as a non-established worker for 18 years, he showed love and passion for what he did on a daily basis. Anyone could have called him to fix a leak and he was ready and willing to assist.  He was also characterised as a serious individual who had a real passion for his work.

During his tenure at the department, Mr. Huggins supervised several maintenance teams on missions throughout Nevis.