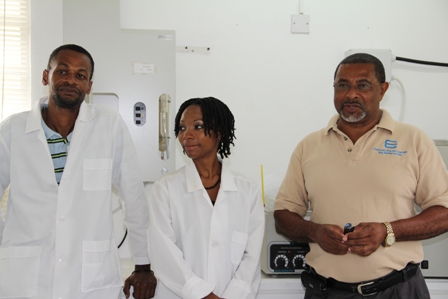 NIA-CHARLESTOWN NEVIS (December 05, 2011) — Residents on Nevis who utilise water from cisterns and tanks now have a facility that would test the water quality from those private sources. The Nevis Water Department through its Laboratory at Stoneygrove, launched the Water Quality Testing programme on Friday December 02, 2011.

In a brief announcement on Friday, General Manager of the Department Mr. George Morris told the Department of Information, that the new service was offered to ensure the quality of water for those who consumed from private sources.
Analyst at the Water Department’s Lab Mrs. Marsha Smith explained that the new service was introduced after several requests from some returning nationals and non nationals who were building vacation homes on Nevis. It was then decided that the service be made available to the public at a fee.
“Persons wishing to have their residential cisterns tested could come to the Water Department’s offices and pay the fees for the cistern testing. Its $60 for the entire package which would include microbial as well as chemical analysis of your cistern waters and you would get a report of the quality of your water.
“Upon payment Mr. Wiltshire and myself would come and sample the water in your cistern and bring them back to our lab facilities for analysis and the reports will be drawn up here and they could either be sent or you can pick them up from the lab upon completion,” she said.
Senior Lab Technician Mr. Llewellyn Wiltshire explained that once the request was scheduled, samples would be collected and returned to the lab for testing. Based on the results the client would be advised as to the recommended treatment based on their findings.

administered to your cistern. We would help out in whatever possible way but firstly we would have to know the capacity of the cistern in terms of size and the amount of water it accommodates,” he said.

However, Mr. Wiltshire explained that in situations where the client did not know the size of the cistern, once the length and width were provided then the capacity could be estimated.
Meantime, Mrs. Smith noted that in the past there had been no other way to ensure the quality of water from private sources and the fee attached to the new service was simply to provide supplies for testing that would allow for the programme’s continuity.
From a health perspective she said the testing would decrease the amount of water borne illnesses in the population and was hopeful that the service would become part of client’s regular maintenance
“You can do this annually, semi annually and just to ensure that your water for your family your children is of a quality that can be maintained,” she said.
The service is also being offered to restaurants and tourism establishments who also serve the public with water from cisterns. They too could make the relevant requests at the offices of the Nevis Water Department in Charlestown.
In early 2012 the testing of coastal and swimming pool waters will be incorporated into the Department’s testing regimes.
The range of tests fall under four categories – Inorganic tests, Physical-Chemical tests, Microbiological tests and Metal tests. They also offer three different packages namely Residential Cistern Supply, Commercial Cistern Supply and Coastal Waters. Interested persons can call at the Department for the relevant costs.