Premier Parry meeting with guests during the meet and greet session
Charlestown, Nevis (Friday, May 25, 2012) — Nationals of St. Kitts and Nevis living in the English Midlands got a first-hand opportunity to learn more about developments taking place at home, when a visiting delegation led by the Premier of Nevis, the Hon. Joseph Parry, held a packed Town Hall Meeting at the Birmingham Community Association, Jenkins Street, Small Heath on Wednesday, May 23.

Close to 200 guests, mostly Nevisians, engaged their leaders by asking questions and making suggestions, as they sought to be updated on what is happening, and impact developments on their homeland.

Premier Parry, who is also the Minister of Finance in the Nevis Island Administration apprised the nationals on how their beloved island survived the world-wide recession, emerging in tact as a result of prudent fiscal measures that were put in place by his government. The recession provided a “double whammy” for Nevis, coming at a time when the island was still reeling from the negative fiscal effects brought about by the closure of the island’s main tourism plant, the Four Seasons Resort. 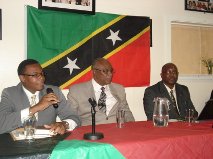 The Nevisian leader told nationals that the NIA negotiated with Four Seasons Resort to have over 200 persons remain in employment, while it worked hard to ensure that the resort reopened under the same brand. He said the government also constructed the much talked-about Cherry Garden Housing Community, and facilitated the expansion of the tele-marketing company Brown Hill Communications, which has helped create quality employment on the island.

He told how his government had employed a stimulus package which allowed for Nevisians to secure jobs in the construction industry. He listed the new community centres built in St. James and St. Thomas, the George Mowbray Hanley Public Market in Charlestown, the brand new Nevis Performing Arts Centre (NEPAC), and a state-of-the-art kitchen at the Charlestown Primary School.

Turning to law enforcement, the Hon. Dwight Cozier outlined what his NRP-led Nevis Island Administration has done to improve conditions for the police on Nevis, listing the recent donation of vehicles, the barracks built at Butlers and Belle Vue, provision of furniture and equipment, and the highlight being the construction of a new police station at Cotton Ground. 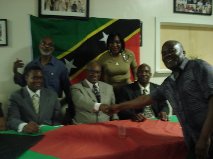 The Hon. Cozier informed the Town Hall Meeting that after many years of lobbying, the Nevis Division of the Royal St. Christopher and Nevis Police Force had finally received a well-deserved upgrade, with an Assistant Commissioner of Police, in the person of Mr. Robert Liburd, now stationed on Nevis.

Other matters addressed at the meeting included the pursuit of geothermal, school lunches, agriculture, health, tourism and financial services, among others.

After the meeting ended, many nationals stayed on for refreshments and a meet and greet session that ended well after 11 pm.

The Premier and the delegation moves next to Manchester where they will meet nationals at Whalley Range  Methodist Church on Friday, May 25th from 7pm and Leeds at the West Indian Center in Chapeltown on Sunday, May 27th from 4pm.