(L-R) Minister of Health on Nevis Hon. Hensley Daniel, Oncologist/Haematologist based in the United States Virgin Island Dr. Erole Mae Hobdy, Registered Nurse and Certified Oncology Nurse Carla Stevens
NIA CHARLESTOWN NEVIS (May 25, 2012) — The Nevis Island Administration has received with open arms USVI based Oncologist /Haematologist Dr. Erole Mae Hobdy to provide services to persons stricken with cancer on Nevis. Minister of Health in the Nevis Island Administration (NIA) Hon. Hensley Daniel made the disclosure at a press briefing at the Ministry of Finance conference room on May 23, 2012.
Mr. Daniel noted that the island had seen an increase in the incidence of cancer and in 2011 there were 24 new recorded cases at varying stages. Treatment for the disease had not been readily available on the island and availability of the new service would help to reduce cost of treatment since it would be administered locally.

“I would like to record my thanks to you on behalf of the Premier and my other colleagues in government for your efforts. I am aware of the commercialisation of medicine and I believe that your willingness to assist us goes beyond that. We are mindful that the people of Nevis would be happy that we have an opportunity or an option to treat themselves here if they become sick with cancer.

“Of course we also know that patients will always want to go abroad but we will know, in time, that the quality of treatment provided by D. Hobdy and her team will say definitively that it is better to stay at home,” he said.

The Health Minister was of the view that the new service would resonate with the families of persons who were ill. Finding resources to allow for treatment had always been a major issue, he said, and many persons have had to make all financial arrangements because they wanted their relatives to survive. He said the NIA has assisted as well.

Mr. Daniel also believed that the efforts of Dr. Hobdy to come to Nevis would help the Nevis Government to arrive at a more malleable position insofar as it related to the treatment of persons on the island with cancer.

He said the service had come at a time when here were a number of cases and if the data from the ministry of health continued to look as it did, then there would be many more patients to be treated.

Mr. Daniel also announced that Dr. Hobdy who was accompanied by her team – Registered Nurse and Oncology Certified Nurse Carla Stevens and her Office Administrator Ms. Eilet Semper – would host a Symposium on June 30th 2012 at the Four Seasons Resort.

He said given a population of at most 15,000, with 24 new cases in a year he was hopeful that an alliance could be formed with Dr. Hobsy and other agencies to determine what was causing cancer in Nevis. “There must be something that we are not yet aware of which is causing this cancer,” he said.

In conclusion, Mr. Daniel said the NIA’s efforts in health were directed at ensuring that the people of Nevis remained healthy. 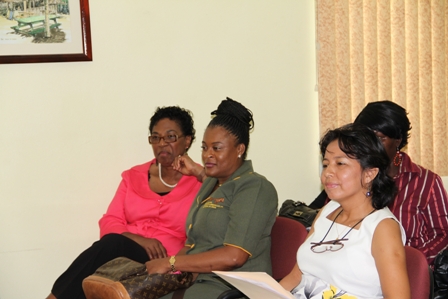 “By our people remaining healthy, we can have productive people to drive the engines for economic development.

“Certainly if more people become sick from cancer it creates real difficulty for us in terms of productivity because as Dr. Hobdy would tell you, they lose quite a bit of time from work. So it is in our interest for people to remain healthy and I would like at this point to urge our people to pay particular attention to our diets and our exercise so that we could prevent the cases of cancer,” he said.

Dr. Hobdy is Jamaican born but based in the USVI. She is licensed to practice in the Federation. She is the owner of the Virgin Islands Oncology and Hematology PC, a medical practice dedicated to the care of oncologic and haematological disorders.