Premier of Nevis, Hon. Joseph Parry
Charlestown, Nevis(Monday, December 3, 2012)–Nevis Premier, the Hon. Joseph Parry told scores of Nevisians and well-wishers at a Town Hall Meeting at the St. Andrew Church Hall in the Bronx, New York on Sunday night, that his only interest in being in politics, is to promote “the betterment of the people of Nevis.”

Parry, the self-less leader of the ruling Nevis Reformation Party (NRP) was addressing close to 200 persons, mostly Nevisians and friends of Nevis, on the final leg of a highly-successful three-city North American week-end tour which also took the Premier and his delegation to Boston, Massachusetts and Toronto, Canada.

The Premier made the statement in reference to a question from the floor on the recent Four Seasons Resort matter, where the government of Nevis had not been receiving in a timely manner its Hotel Accommodation Tax which had been collected from guests, and held in trust by the five- star Resort on behalf of the Nevis Tourism Authority (NTA).

The Premier spoke similarly of the Cable TV matter, where the foreign-owned cable company Caribbean Communications, wanted to raise cable rates without proper consultation with the government.

“When foreign entities do business with Nevis they must respect the people of the island, and the leader. I am not like other Nevisian leaders who want a free meal or a free round of golf, I want Nevisians to be treated well and fairly,” said the Hon. Parry to a rousing round of applause.

The Premier made mention of the strange anti-Nevis stance that the opposition Concerned Citizens Movement (CCM) took against the government, and the people of Nevis, as both matters were played out…and in several other matters beneficial to the people of Nevis. 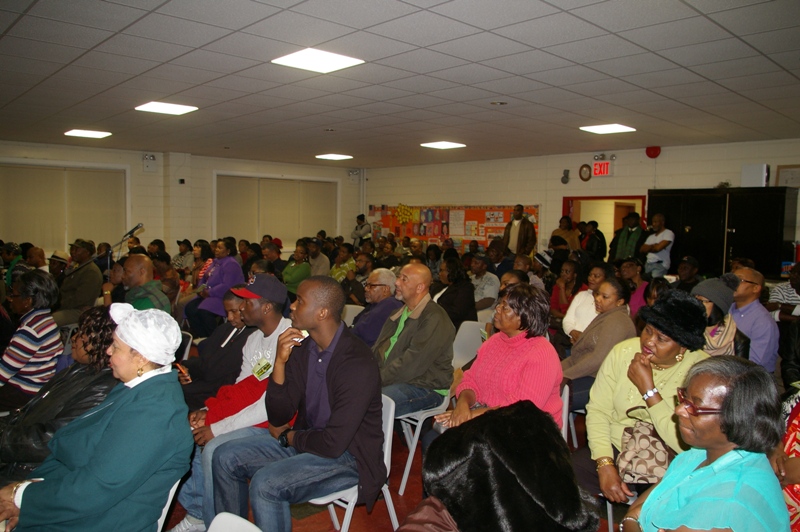 “Instead of the Opposition working on behalf of the people of Nevis, they sided with the Four Seasons Resort and the Cable company,” said Premier Parry to scores of shocked faces in the audience.

The Hon. Joseph Parry told the audience how he had said at a public political meeting in Fountain Village some months ago, that the Four Seasons Resort should pay the monies owed to the government. He said that the CCM sent clips of the meeting to radio stations across the Federation of St. Kitts and Nevis in an effort to embarrass him.

“That same afternoon I called in on the radio and made a statement, and then people called in from both St. Kitts and Nevis and remarked that I acted like Nelson Mandela on behalf of the people of Nevis”, said Premier Parry to more applause.

Joining Premier Parry at Sunday’s meeting, were the Attorney General, Hon. Patrice Nisbett; Minister of Agriculture, Communications and Works, Hon. Robelto Hector, and former deputy premier, Mr. Hensley Daniel, all of whom highlighted the achievements of the six-year-old NRP-led administration – including the international financial services, agriculture and high-end tourism, among others. The presenters also discussed the party’s impressive plans and programs for a new five-year term.

“Nevis is really engaged in a modern way with the rest of the international community,” said the Premier, who noted the island’s diversified and business-focused economy.

He said the private sector had placed great confidence in his government in starting such businesses in Nevis as: Brown Hill Communications, Horsfords Valu-Mart IGA, Tamarind Cove Marina, Hamilton Condominiums, Four Seasons Estate Villas, and a host of others. 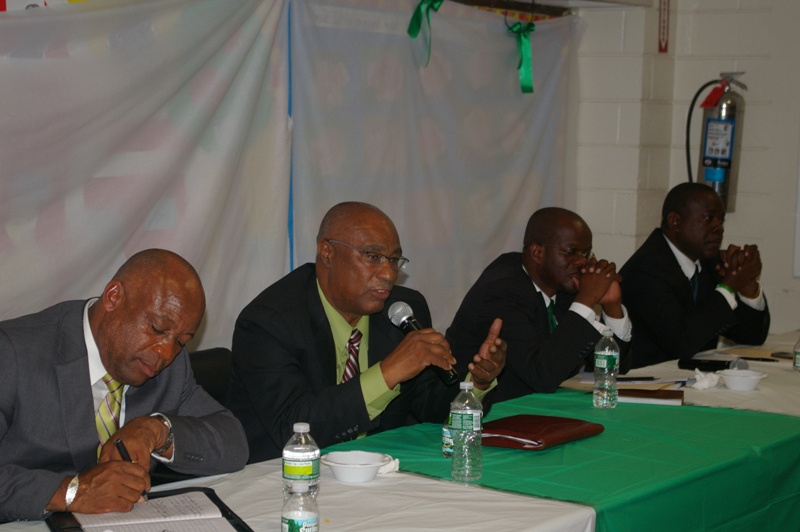 The Premier dispelled the negative notions being peddled by the CCM naysayers about the Nevis economy, telling his audience that the “challenges of the global economy” today has forced the nation to rethink its approach, and for us to be innovative, as his administration tried to diversify the economy in order to stay solvent in hard times.

Hotel construction – including the anticipated Aman Hotel project – will generate temporary and permanent jobs, he said.

Parry also mentioned the addition of vocational and technical education to supplement existing academic curricula, and the support of the nation’s new economic ventures; increased health care projects, and the encouragement of homeownership among locals.

Most attendees agreed that the meeting achieved its goals, as the speakers were detailed, the power-point presentation was informative, and all questions were answered directly and fully.