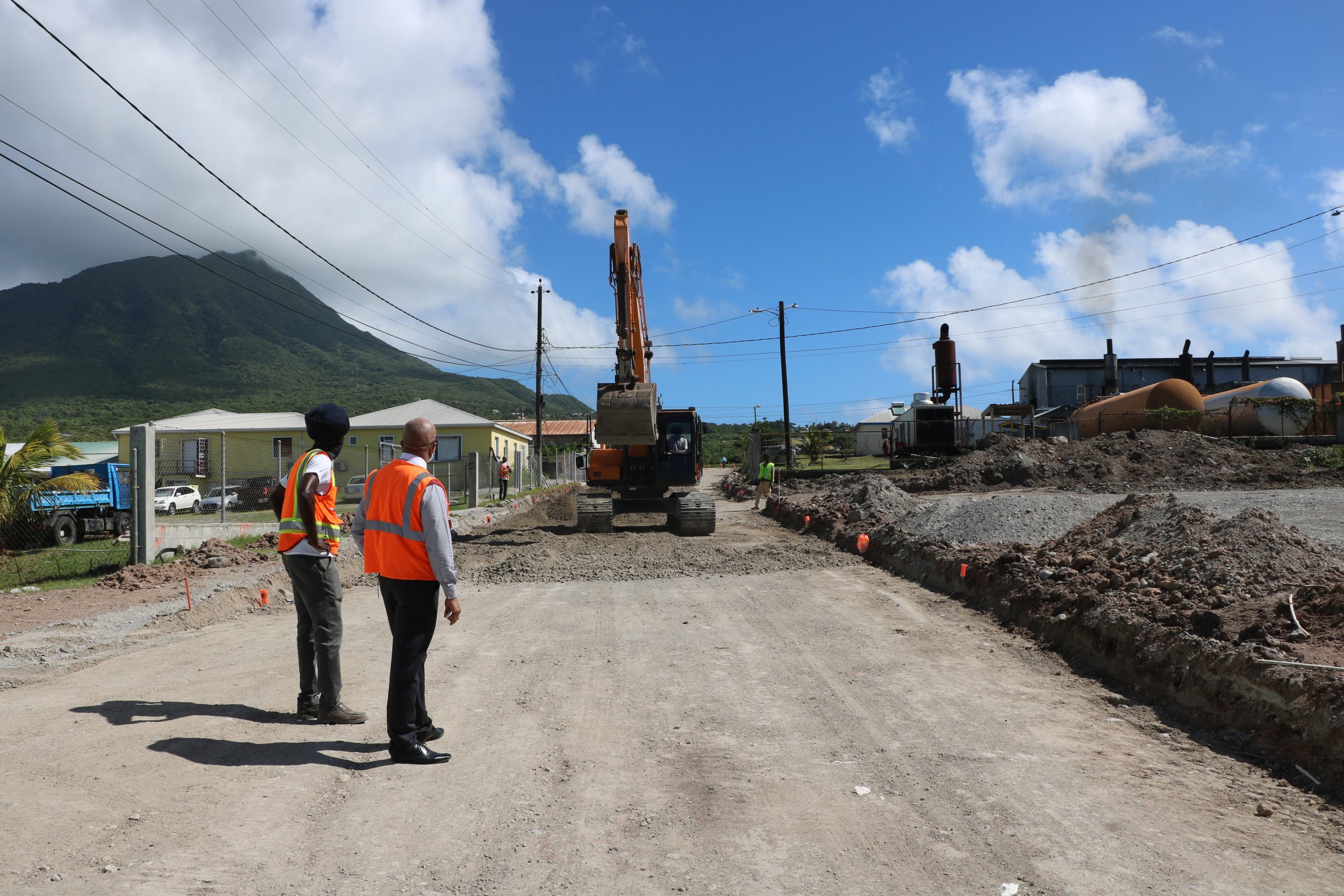 Hon. Spencer Brand, Minister of Public Works and Physical Planning in the Nevis Island Administration (r) surveys the road rehabilitation project next to the NEVLEC power station in Prospect (November 16, 2021)

NIA CHARLESTOWN NEVIS (November 22, 2021)- – The Public Works Department (PWD) in the Nevis Island Administration (NIA) is undertaking a road rehabilitation project in Prospect that will benefit the Nevis Electricity Company Ltd (NEVLEC) power station and surrounding businesses in the area.

The PWD is paving the dirt road that runs from the power station to the LEFCO Equipment Rental and Construction Company. The engineering and surveying work is being carried out by the PWD with LEFCO as the contractor for the project.

Hon. Spencer Brand, NIA Minister of Public Works and Physical Planning, recently visited the site and noted his satisfaction with the pace of the civil works thus far.

“I am satisfied with the progress that has been made over the past four weeks and I want to thank LEFCO Construction for partnering with the NIA so that we can see this project completed in a very short period of time,” he said.

The Minister went on to explain why that stretch of road was selected for rehabilitation.

“The general public would recall that in 2017 the NIA would have purchased a brand new Wärtsilä generator for NEVLEC, and over the years there have been numerous complaints that the dust from this road has been severely affecting that generator. The impact from the dusk on the generator was one of the overriding factors why we felt it was necessary to have this road done.

“Because of the dust they have had to use excess amounts of oil in the generator and we are hoping that that would be a thing of the past.”

He said the Ministry of Public Works is not only bringing relief to NEVLEC and the other businesses with respect to the dust issue, but it is also upgrading the main water supply to the area to a four inch line.

Mr. Jevon Williams, Director of the PWD, said they chose to lay a concrete surface because of the nature of the traffic that will be using this road, mainly heavy equipment and large trucks.

“We are constructing a road of approximately 22 feet. The concrete provides a more durable surface over the long term; with asphalt the surface could become worn rather quickly,” he said.

Giving an overview of the work, Mr. Oswald Wilfred, Construction Manager at LEFCO, said the initial stage was to create bypasses to accommodate the different businesses that are in the area, then excavating the existing base of the road.

“Presently we have applied the first base, which is the substructure of the road, to finish one section where we will be preparing the curbs, and then move on to the actual casting of the road. In terms of the time frame, it will be a very long period because concrete has to be cured before you can allow traffic onto it, and due to the fact that we have many businesses in the area we will try to work in a systematic way whereby we will allow businesses to be transferred properly and efficiently, so that nobody would have to shut down,” he outlined.

Mr. Wilfred further noted that some drain work will be involved to channel runoff water from the road into the ghaut area at the base of the road.

The roadwork, which commenced mid-October, is scheduled to be completed over the next three to four months.