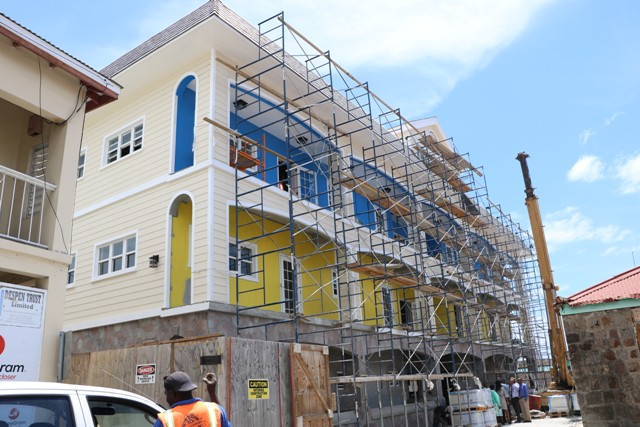 The new building to house the Treasury Department, the Inland Revenue Department and the Information Technology Department under construction in 2019 to be officially opened on January 30, 2020

Hon. Mark Brantley, Premier of Nevis, announced the opening while commending his predecessor and his permanent secretary, at his monthly press conference on January 28, 2020, at the NIA’s Cabinet room at Pinney’s Estate.

“I would want to publicly commend the Hon. Vance Amory, former premier and his permanent secretary, now my permanent secretary Mr. Colin Dore because they championed the redevelopment of that area, and they insisted that a new building should emerge from the ashes and that new treasury building has now emerged…We are finally ready to open it, and so I’m advised that the treasury building will be opened on Thursday at 3:30,” he said.

Mr. Brantley noted that the Public Works Department is currently engaged in

additional infrastructural work on Lower Happy Hill Drive to restore the road, an area which the administration hopes would be transformed for use solely by pedestrians.

“We are toying with the idea of making that area in front the building pedestrian traffic only. So we are working on that and we are hopeful that we will get the support of the public. The idea there really is to create, and we think we have created a landmark structure in the heart of Charlestown,” he added.