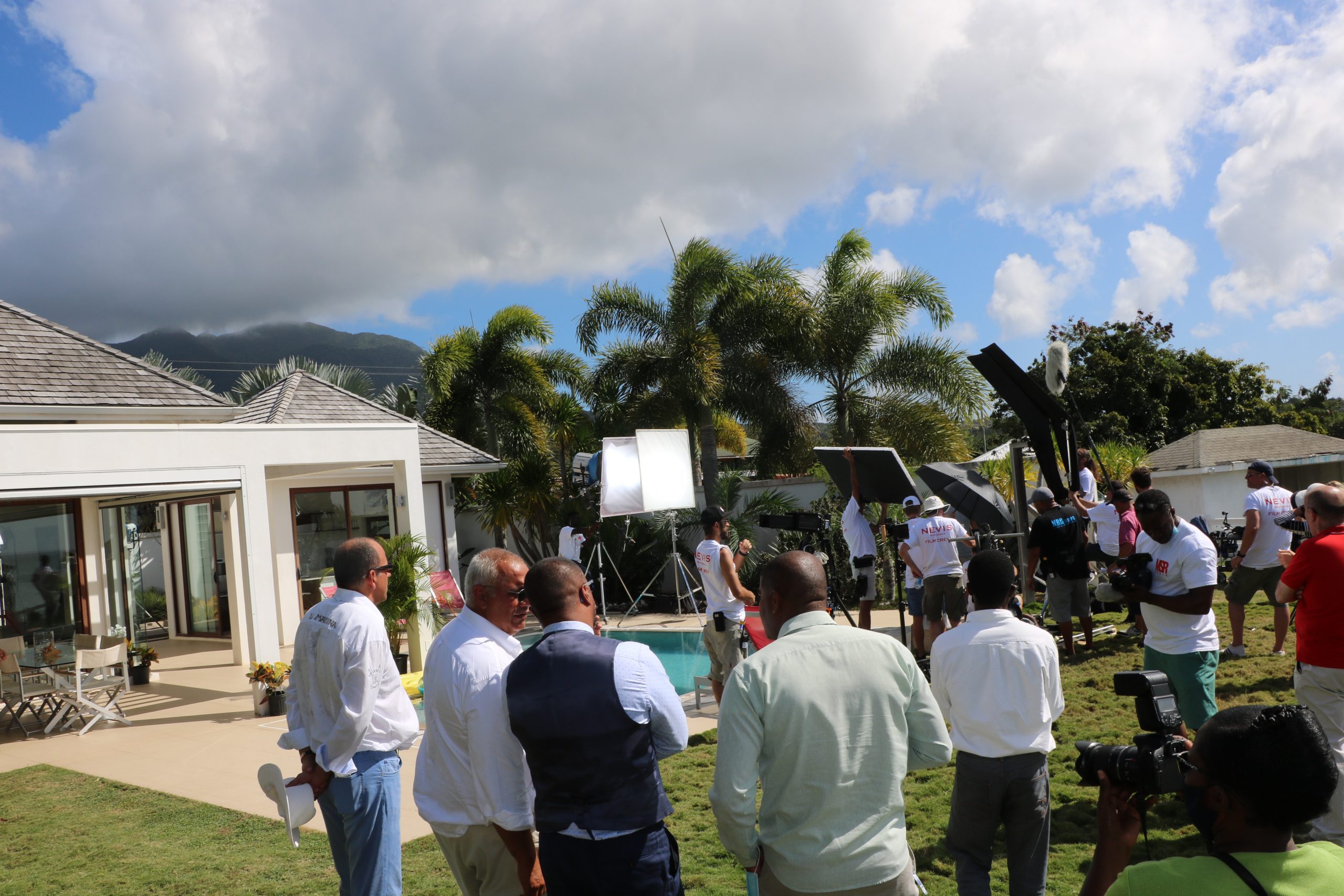 Hon. Mark Brantley, Premier of Nevis with MSR Media producer Philippe Martinez and others during the first day of filming ‘One Year Off’ at Chrishi Beach, Nevis on February 25, 2021

NIA CHARLESTOWN NEVIS (March 03, 2021) – – The Nevis Island Administration (NIA) is working assiduously to attract more filmmakers to the island of Nevis as part of the government’s efforts at diversifying the economy.

This is according to Premier Hon. Mark Brantley, Minister of Finance, Economic Planning, and Foreign Investments in the NIA, during his monthly press conference on February 25, 2021.

He said having secured a deal with MSR Media to produce two films on Nevis in 2021 with the possibility of four additional films in the near future, the NIA is not resting on its laurels with respect to developing this new industry.

“The government is not stopping there.  We have not said well we were able to attract these guys, they’re going to do a film. We have already started the process of reaching out to other studios, to other independent film makers, even television studios and we have said to them listen, take a look at Nevis.

“We are open for business, we are safe, and we can accommodate your film and your filming needs right here on the island…

“We haven’t stopped there. We are also looking at the fashion and photography industry. We’ve had some fashion shoots that have happened here already but we’re now promoting that even more.”

With the film industry being a new endeavor for the Administration, the Premier said he hopes that people will respond positively to the government’s message.

“We are now looking at something that is brand new and has never before been done on the island, that is, the whole movie or film industry…

“We feel that we are certainly at the cusp, at the entry point of a new industry here on the island and the wider Federation that we would wish to encourage.”

On February 25, MSR Media, a boutique film and production company based in the United Kingdom, began filming its first of two movies, the comedy ‘One Year Off’ on Nevis.

Premier Brantley spoke to some of the economic benefits of having MSR Media’s cast and crew now living on the island during filming.

He said so far they have hired 32 full-time staff, rented 22 apartments/units at the Hamilton Resort and about six villas for the rest of the year, in addition to renting out Golden Rock Inn for three weeks for filming.

The film company has also rented several cars, trucks and vans from various agencies for the rest of the year, and have been engaging with caterers and other service providers.

Eleven local actors have been hired with speaking roles, and additionally some 167 persons are also being paid as supporting artistes.

Mr. Brantley highlighted that yet another advantage of having a movie filmed on Nevis is the skills transfer as locals train in the film-making process and the art of acting.

He noted that the COVID-19 pandemic has taught the NIA a valuable lesson that Nevis can no longer put all its eggs in the tourism basket.

“We recognize the preoccupation with hotels and tourism. COVID demonstrated that there was some difficulty in that preoccupation, because whilst over the years that I have been here the standard talking point for development has been ‘no new hotel come’, ‘the last hotel that came was Four Seasons’.

“I ask the question rhetorically, if we had 100 hotels, what value would they have been with the airlines shut down and the airport shut down because of COVID?”