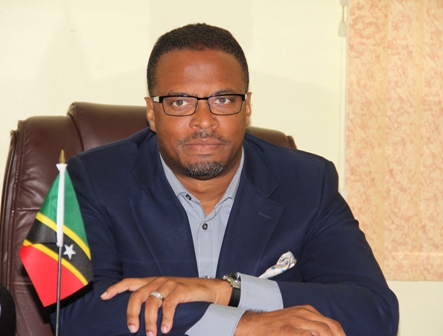 Acting Premier of Nevis Hon. Mark Brantley
NIA CHARLESTOWN NEVIS (November 25, 2013) –The Nevis Island Administration (NIA) decided to adopt a different approach to geothermal energy development on Nevis, a move which has Acting Premier on Nevis Hon. Mark Brantley pregnant with pride.
He made his position on the matter when he delivered remarks at a press conference hosted by Minister for Renewable Energy and Environment Hon. Alexis Jeffers,on November 21, 2013, at the Ministry of Finance conference room in Charlestown. The event saw the announcement of the winning bidder who would be awarded a contract to commence a three-year geothermal energy development project on the island in early 2014.
“For me…it’s an incredibly proud moment.Geothermal, as the Minister would have indicated, started way back in 2004. At that point, the effort was being led by the Hon. Michael Perkins, who was then the responsible Minister in the Nevis Island Administration. Two years later, the government changed and the then government adopted a different approach.
“One of the reasons I’m so proud to be here…really has to do with the fact that we have had so many false promises; so many false starts over the past 6 and ½ -7 years, that we as a government, decided that we would approach it differently. So one of the things we immediately set about doing was to get some technical advice to work on our side. That was something that we advocated for in opposition and that is sorely lacking in the past dispensation,” he said.
According to Mr. Brantley, the Administration had approached the United States Departmentof Energy and was provided with the services of a team of experts, at no cost to the island, which assisted the process every step of the way for which the government was grateful.
“I want the public and the press to know, that over the past several months, the Nevis Island Administration has been guided in this process by technical experts provided and paid for by the United States State Department Energy Desk and that, therefore, has been very useful for us.
“I want to emphasize, it didn’t cost us anything. We went out and we spoke to them and they were prepared to provide their assistance and we are very grateful to them. I want, as Acting Premier, to record the Government’s gratitude to the United States Department,” he said.
The Acting Premier further explained that the Administration went through the Request ForProposal (RFP) process and in an effort to ensure that the process was a transparent one, bidderswere invited to provide proposals for the first phase of the project of a 10megawatt plant.
In response to the request, Mr. Brantley noted that three international bidders responded and, with additional assistance, moved the process forward.
“We had three very serious international players who responded.We had the assistance of Mr. Michael Perkins who has come back in a different capacity now but who assisted us in the consultations and the discussions and the technical aspects of this particular project.So with those various technical people advising and guiding the process, including some independent consultants who have been provided to us from Deloitte, a major international accounting and consulting firm, we were able to sit as a Cabinet and distil all this information.
“We met in special sitting of Cabinet, recognizing the importance of this particular venture. We eventually arrived at a conclusion that NREI [Nevis Renewable Energy International] would be our preferred partner to develop this project,” he said.
Mr. Brantley added that the NIA wanted to make the announcement formal to make it known that the sitting Administration’s new approach to development was not about hype.
“We as an Administration have a particular approach to development. We are not about hype; we are not about a lot of chatter, we are about getting the job done. So what we have done in geothermal, in light of all the false promises that we have had in the past, we have decided that we would go about it very deliberately.
“So whilst we might not have been talking to the press and to the public, I can assure you that over the past nine months or so, there has been an intense amount of work that was undertaken to bring us to this day. So we wanted to come and to make the announcement, that finally, we have selected a developer…a group of people that we feel have the necessary international experience; the necessary technical expertise and the necessary financial capacity, most importantly, to deliver geothermal,” he said.