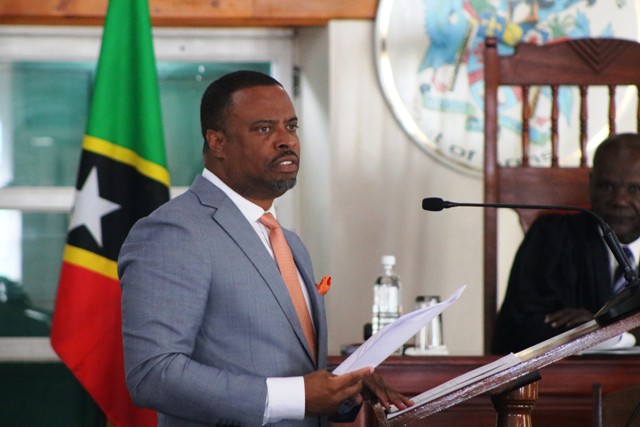 Hon. Mark Brantley, Premier of Nevis and Minister of Finance making his presentation at the Nevis Island Assembly sitting on December 28, 2018

The bills were tabled at the parliamentary sitting by Hon. Mark Brantley, Premier of Nevis and Minister of Finance, in what he described as a move he hopes would satisfy concerns of the European Union (EU) regarding the island’s Offshore Financial Services Sector with a stipulated deadline of December 31, 2018.

“So we are meeting the deadline imposed by the European Union. We have approached this in good faith to do what we think they want us to do, and that is to repeal the tax exempt provisions that hitherto existed for the island of Nevis under the Nevis Business Corporation Ordinance, and the Limited Liability Company Ordinance,” he said while presenting the bills

Mr. Brantley used the opportunity to give some detail of the new legislation that would be used to repeal the parent legislation.

“We are repealing the tax exempt status but we are grandfathering or saving the provision until the 30th of June 2021 for those existing entities or entities formed before December 31st 2018. Anything formed after December 31st, 2018 will not benefit from a tax exemption…

“What we feel the EU wants us to do which is to have the same tax regimen for local companies as for these entities formed under this legislation that will be achieved for new entities being formed after December 31st, but the thousands, many thousands of entities that currently exist on our books they will continue to get the tax exempt status until June 30th, 2021,” he said.

The Premier noted that time was paramount since the administration was notified one week ago of the EU’s deadline. As a result staff at the Legal Department were required to work throughout the Christmas holiday to prepare the amendments for the sitting. The parent ordinance had to be amended, repealed and replaced, gazetted and submitted to the EU by January 03, 2019.