CHARLESTOWN NEVIS (December 15, 2010) — The Nevis Island Administration (NIA) was commend by a Senior Civil Servant for its move to provide vendors at the Charlestown Public Market with a brand new facility early in 2011, having endured adverse working conditions there for several years.

The gratitude came from Permanent Secretary in the Ministry of Agriculture Hon. Kelvin Daly in an interview with the Department of Information on Monday following the start of demolition work on the 50 year old facility on Sunday.

“It may sound political but it is really not. It is all about accountability and transparency and just to say thank you to persons who have assisted. This Public Market has been an eyesore for a while on Nevis.

“I met it here in 2006 when I came to the Ministry and I am glad to know I will not leave it here when I leave and I must thank the Hon. Premier Parry and my Minister Hector for identifying this project and going with us and agreeing to spend the resources to get it done,” he said. 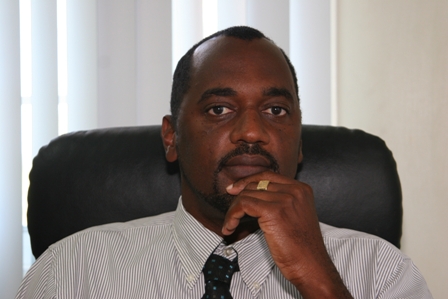 Senior Civil Servant and Permanent Secretary in the Ministry of Agriculture on Nevis Dr. Kelvin Daly

Dr. Daly said the project represented the seriousness of the NIA with regard to the redevelopment of Charlestown and the development of agriculture on the island because such large public private partnerships in which the government invested so much money into a project they had very little chance of recovering their investment from was a rear occurrence.

He said the move was indicative of the fact that the members of the NIA were forward thinking.

“It is a sign of persons who have forward thinking not just one dimensional thinking to get a project of this scope done because it has so much repercussions, so much benefits along the line.  Cruise ships come right through there, the proposed redevelopment for Charlestown happens right there, the new Fisheries Complex is supposed to happen just to the south and so it fits right into the whole Charlestown upliftment.

“The timing is just right and I think it will precede all those developments and it’s nice to know that we are first in that scope because  sometimes people think we are sitting back waiting for external sources of funding but it is the NIA going forward with a project that beats everybody else in terms of timing. So my kudos to the NIA for taking the initiative to get it done and done on time,” he said.

Dr. Daly reminded that Premier of Nevis and Minister of Finance Hon. Joseph Parry had disclosed in his Budget Address at a sitting of the Nevis Island Assembly recently that December would not end without the commencement of the project.