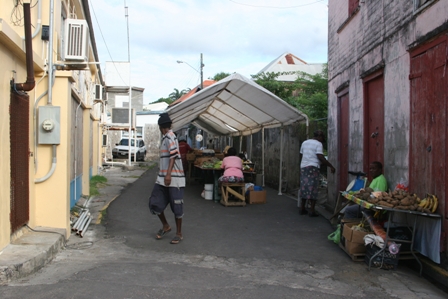 CHARLESTOWN NEVIS (December 15, 2010) — The Vendors at the Charlestown Public Market received a public apology from Permanent Secretary in the Ministry of Agriculture on Nevis Dr. Kelvin Daly, for an unforeseen disruption in their service early Monday morning. He said a miscommunication between the contractor and his Ministry with regard to the exact time demolition work would commence on the market was responsible.

In an interview with the Department of Information on Monday, he noted that the Ministry was able to spring into action with its pre arranged plans to house the vendors when they arrived at the Market and demolition work had already commenced.

“Unfortunately the call did not come in time but we quickly adjusted and put our plan in place. So let me first apologise to those persons…

“The persons who were caught unaware, we did try to have a meeting last week Thursday with some of them. The word didn’t spread as we would like but I’d just remind them that they are the ones who have been complaining about the bad conditions for years. Therefore this is the opportunity to be on our side for once and bear with the remodelling because it is in their favour.” he said. 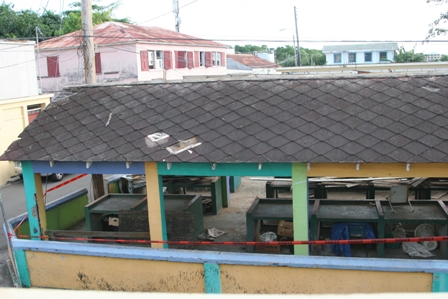 Dr. Daly also used the opportunity to urge the vendors to be patient and their discomfort would be a little while but worth the wait.

“The project is something they have asked for to get sorted out and here it is they are being sorted out. So whatever discomfort they are facing and whatever disgust they felt this morning [Monday], it could be tempered by the fact that in a few months they will be in brand new facilities that would be the envy of most around.

“I have been to many markets in St. Lucia, St. Vincent, Antigua and this will rank up there with some of the best I have seen in terms of utility, convenience and beauty. To those vendors – your time has come, just bear with us you will get a new and improved structure,” he said.

In the interim, the local vendors -about 10 at any given time- will be operating from Slack’s Alley an area behind the Treasury Building, under tents and with the use of tables provided by the Ministry for the duration of the construction of the Market.

Provisions have also been made for the weekly vendors who visit Nevis every Tuesday. They have been relocated along Market Street in the vicinity of Rohan Claxton’s Pharmacy. That measure is temporary and the tents and tables will be removed at the end of the day when the vendors leave and will be erected every Tuesday once needed. 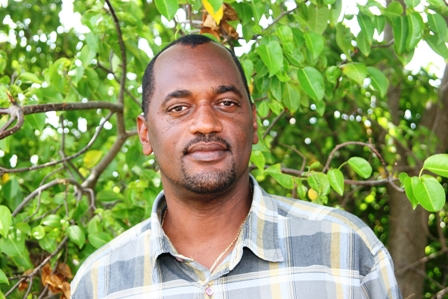 Dr. Kelvin Daly Permanent Secretary in the Ministry of Agriculture on Nevis

With regard to the meat vendors, alternative arrangements have also been made. Dr. Daly said in the meantime they will utilise the facility at the Fisheries Corporative once a week so it will not be too much of an inconvenience for them.

Construction of a new and modern Charlestown Public Market is expected to conclude in an estimated five months. Contractor for the project is Mr. Meredith “Sapodilla” Hendrickson of Hickmans Village.

Dr. Daly said the project is one of the projects involved in the remodelling of Charlestown and the project will be guided by the Public Works Department through Permanent Secretary in the Ministry of Communication and Works Mr. Ernie Stapleton.

“I think this is one of the first rear instances that we have inter-ministerial projects of this scope between the Ministry of Agriculture and the Ministry of Communications and Works…The first estimate was about EC$850,000 but I believe it’s money well spent.

“I believe that the shape and the condition that the public Market was in was a health hazard. It was a risk to vendors because now and then you would hear somebody saying something fell from the roof due to dry rot. It has taken a lot of time to get it into that unsafe condition and we have endeavoured over the past two years now to get it sorted out and thankfully we will get it done through the stimulus package.” Dr. Daly said.