Contractor; Mr. Lesroy Hanley of Hanley’s Construction Services with Minister of Trade in the NIA and former resident of Fountain the Honourable Dwight Cozier

NIA-CHARLESTOWN, NEVIS (December 15TH 2010) — With the construction of a number of community centres already under his belt, Deputy Premier and Minister of Community Development in the Nevis Island Administration [NIA] the Honourable Hensley Daniel has again waved the flag to start construction on another community centre.

The communities of Fountain and Mount Lily will, early next year, receive “a real community centre,” Minister Daniel said as he commented on the “poor state” of the existing building that will be refurbished by Fountain contractor Mr. Lesroy Hanley of Hanley’s Construction Services.

The race towards the centre’s completion began on Dec. 2 and is expected to last three months under the directorship of the Ministry of Communication’s Project Management Unit and the Public Works Department.

In addition to being a community centre for people residing in the Fountain and Mount Lily villages, the building will be redesigned as a meeting place; learning and recreational facility; an accommodation area for sporting activities and an emergency shelter.

The two storey building will, on the first floor, house a kitchen, classroom, general office, library, storeroom, and restroom while the second floor will house an auditorium, computer room and restroom.

According to Permanent Secretary in the Ministry of Communication and Works Mr. Ernie Stapleton, the area will be “well lit” and “the grounds will be landscaped to facilitate parking and pedestrian movement.”

The stadium, he said, “will be further developed in the near future.” 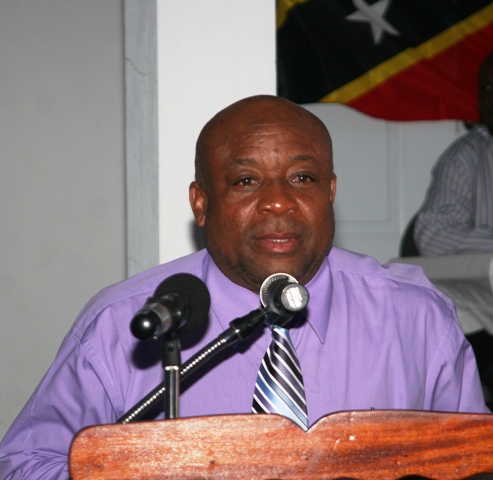 Minister of Community Development in the NIA the Honourable Hensley Daniel

Upon completion, the community centre will facilitate programmes in the arts; homework assistance; leadership and entrepreneurship development; employment training; reading; essay writing and cooking. Quizzes and computer classes will also be held at the facility.

These, Minister Daniel said, are expected to “reinvigorate the community with life.”

Minister Daniel, who also holds responsibility for Youth, said that the refurbishment of the centre was “an attempt to deal with [the] prevention of crime and other forms of anti-social behaviour.”

“We have come so that we can help to change the communities in Nevis which are slowly becoming dormitory communities; where people leave in the morning and come back in the evening and see nobody,” he added.

Former resident of Fountain and now Minister of Trade in the NIA, the Hon. Dwight Cozier was among those who addressed the gathering at what he described as an “auspicious occasion.”

While other presenters referred to the event as a launch, Minister Cozier said the centre was being reformed.

“We are called the Nevis Reformation Party and I believe this occasion underscores the reformation in that name and that is exactly what we’re doing here this afternoon,” Minister Cozier said as he was cheered on by members of the audience.

In addition to assuring the villagers that “the great work would continue,” he encouraged them to feel proud of the NIA’s attempt to restore their community centre.

“As people from Fountain, we have endured a long and arduous climb to this moment and so, in my welcome remarks to you here on this lovely hill that graces the magnificent edifice and village of Fountain, I want to tell you that I, Dwight Cozier, son of the soil of Fountain, cannot be more proud,” he said.

As the sun set at Fountain village, Minister Cozier became more passionate in his delivery. He challenged the villagers to “defend” their community centre, their sense of community spirit and the NRP-led administration.