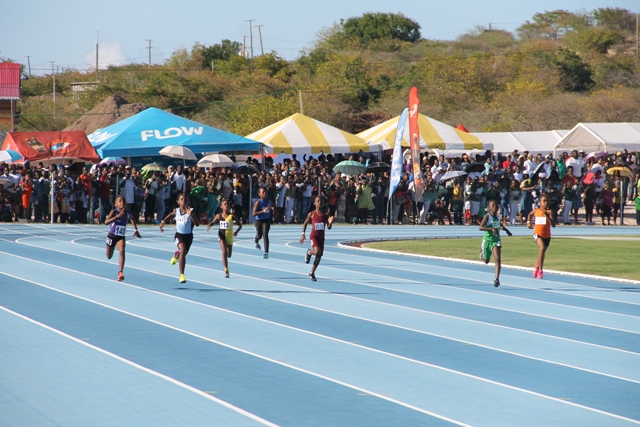 A race at the 28thGulf Insurance Interprimary Schools Athletics Championship   at the Long Point sporting facility on March 28, 2018 (file photo)

NIA CHARLESTOWN NEVIS (June 26, 2018) —The Nevis Island Administration (NIA) remains committed to Phase 2 of the Long Point sporting facility as it continues to source funding for the project.

Hon. Mark Brantley, Premier of Nevis was at the time responding to the status of the project at his 5th monthly press conference at the NIA’s Cabinet Room at Pinney’s Estate on June 25, 2018.

“To put it bluntly, we’re trying still to see if we can find the resources to do it… I think we’re talking about an injection of about $10million.

“We have made a commitment to the youth and to those not so young who are engaged in sports so we intend to do that second phase but at this juncture, I can’t give you any concrete information as to a start date because we have to secure the funding. So that is what we’re seeking to achieve,” he said.

Mr. Brantley added that at the moment the NIA is engaged in a number of other significant Capital projects on the island.

“The government at this point has a lot of other critical projects that are on-stream like the hospital, the road network…and the Police Station in New Castle which is being funded by the NIA. So these are major projects, major injections of Capital that we are being forced to make,” he said.

The Public Works Department in the Ministry of Communication and Works is also engaged at present in the Brown Hill Road Rehabilitation project after completing road enhancements on other roads including roads in upper and lower Stony Grove.

Premier Brantley stated that the government would seek to have all the resources before commencing phase two of the sporting facility, so that lack of funding would not be an issue once construction commences.

Phase one, included laying the final surface of the all-weather 400-meter track and field facility, seating accommodation,construction of washroom facilities.

It was completed in March to host the 28th Gulf Insurance Interprimary Schools Athletics Championship.