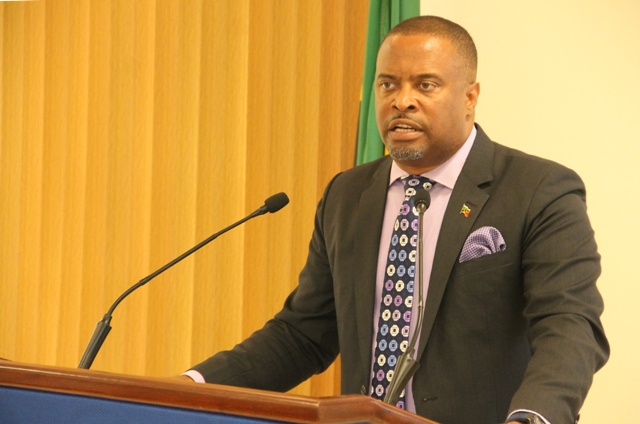 Hon. Mark Brantley, Premier of Nevis at his 5th monthly press conference at the Cabinet Room at Pinney’s Estate on June 25, 2018

NIA CHARLESTOWN NEVIS (June 25, 2018) — The Nevis Island Administration (NIA) has made a major step toward operationalising the Integrity in Public Life legislation, five years after it was passed in the Nevis Island Assembly.

Hon. Mark Brantley, Premier of Nevis, made the announcement at his fifth monthly press conference at the Cabinet Room at Pinney’s Estate on June 25, 2018, as he announced the three members appointed to the Integrity in Public Life Commission. He had given a commitment in December 2017, as leader of the new Administration, that the commission would be established within six months.

“I am very pleased to announce that the members of the Integrity in Public Life Commission have been appointed. The instruments have been issued…

Mr. Brantley noted that the legislation stipulates that the chairman of the commission has to be a retired judge or a lawyer with at least 15 years experience.

The Premier said the NIA welcomed the formation of the commission. However, he noted that the members are expected to collectively determine a budget.

“Now that the commission has been appointed, it is for them now to come up with their budget and for us to move forward in terms of regularising the process,” he said.

Mr. Brantley thanked the public for their patience and said the Administration looks forward to the commission doing the very important work which lies ahead.

The Commission will have the powers, rights and privileges of the High Court, in respect of enforcing the attendance of witnesses and examining them on oath, affirmation or otherwise; compelling the production of documents and the issue of a commission or request to a witness abroad.

Also, in the exercise of its functions, under the Ordinance, the Commission would not be subject to the control or direction of any person or authority.

The Bill, which was tabled by Hon. Vance Amory, Former Premier of Nevis, and  unanimously passed in the Nevis Island Assembly in September 2013, establishes clear rules and guidelines to govern the manner in which serving politicians and public servants conduct the business of the people of Nevis.

The Integrity in Public Life legislation would be used to evaluate the performance of their duties, provide a system which will act as a “watchdog” to protect the integrity of the Public Service and seek to prevent abuse of the public office.

The former Premier added that the Ordinance would also prevent those seeking public office from engaging in unethical practices which are unfavourable to the public and to ensure that the principles of transparency and good governance will remove the temptation of any attempt to engage in actions or activities which are against the good of the people.