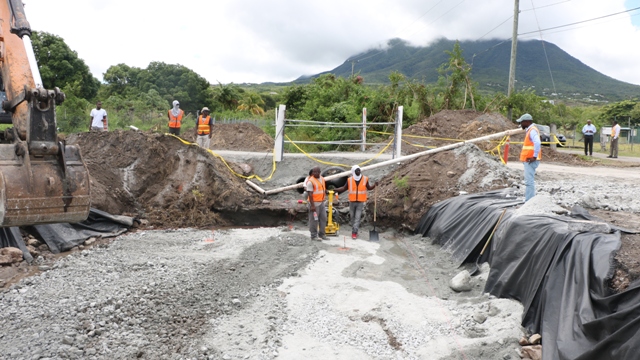 Workers from contractors Surrey Paving and Aggregate Co. Caribbean Ltd. laying the foundation for the installation of a box culvert to alleviate flooding in the Cades Bay area on July 29, 2019

The minister spoke to the Department of Information on July 29, 2019, when he paid an official visit to the construction site. The project is being undertaken by contractors Surrey Paving and Aggregate Co. Caribbean Ltd.

“I am very pleased with the progress thus far. We are here in the Cades Bay area where we are seeing the initial construction phase of the main culvert. As you know, in this area we often times suffer major flooding, and we would have had long discussions with the contractor that one of the main objectives of this project is to deal with the drainage issue in this area, and the reconstruction of this culvert here is in essence to solve that problem.

“I am very satisfied with the progress. I think they have been on site for approximately two weeks and they have made tremendous progress thus far, and that is a clear indication that we hope to have this project completed in the very possible shortest time which is, I hope before Independence,” he said.

Mr. Michael Morrison the contractor’s Project Manager spoke of the work in an area in Cades Bay, which is prone to major flooding.

“In the area where we are standing now there was previously two 600 culverts which was inadequate because of the volume of water that would come down there and create localised flooding. The water wasn’t leaving the area fast enough.

“Our designers have come up with a solution. We are now installing a 2×3-metre concrete box culvert. This would alleviate the flooding in the area which would allow the water to transit safely across the road without causing any flooding or delay in traffic,” he said.

The Project Manager added that in the Nelson Spring /Cotton Ground area which is also prone to severe flooding, they have come up with a number of solutions to alleviate the issue, including the installation of another box culvert. However construction will commence after the upcoming Culturama festive season.

Regarding changes to the actual road in the same area, Mr. Morrison said there is some planned realignment which has already commenced.

“If you look carefully you will see a new cut into the hill out closer to Yachtsman Grill that will improve the line of sight for traffic coming onward. Hence the road will be much…safer than it is at present,” he said.

Also present on the site visit were Mr. Denzil Stanley, Principal Assistant Secretary in the Ministry of Communication and Works; and Mr. Jevon Williams, Engineer, the NIA’s Project Manager for the project.