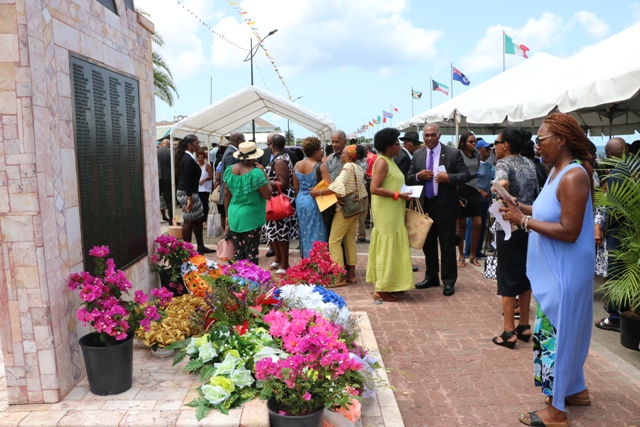 NIA CHARLESTOWN NEVIS (August 01, 2019) — Pastor Arthur Freeman, urged persons at the 49th Anniversary Memorial Service for the M.V. Christena Disaster on August 01, 2019, to cherish the memory of the 233 who perished at sea on that fateful day in 1970.

Mr. Freeman made the call while delivering a sermonette at the annual memorial service hosted by the Nevis Island Administration, next to the Christena Memorial on Samuel Hunkins Drive in Charlestown.

“We are here today not to grieve, not to mourn but to celebrate their memories – fathers, mothers, siblings, aunts, uncles, cousins and the whole works. Let us remember that we have to cherish, cherish those memories as if they were still here with us today,” he said.

The MV Christena was a government-owned and operated ferry which had sailed the 12-mile route between St. Kitts and Nevis for 11 years before it sank while en route to Nevis. It is said that at the time of the disaster on August 01, 1970 there were 321 passengers on board, but only 91 survived.

Meantime, a visibly emotional Mr. Malcolm “Molly” Simmonds one of the four survivors told the Department of Information that the memorial service brought back sadness.

“Today brings back some memories that make me feel very sad, sad, sad, sad but I am blessed to be here. Actually I am 49 years old today, 49, because…had I went down in Christena that would have been it so 49 years, actually I am not 49 I am 68 years old.

“However, it’s some feelings, goose bumps and so on coming on me here. I am pleased to see so many of us here from abroad from Nevis and what else can I say? I’m just happy and blessed to be alive,” he said.

Mr. Romeo Parris, who lost his mother Ms. Anna Parris of Craddock Road in the disaster when he was six years, said it was the first time he mustered the courage to attend the memorial ceremony.

“I am the fifth child. She died and left eight of us and so this is my first time coming to this memorial. I usually come after with my grandchildren to avoid emotions over the years I have always tried to bury. It is very painful but now the older I become the more I miss her. The more I wish that she was a part of my life. Six years is a young age. All I remember was running down to the beach screaming because me and my older brother Calvin actually were supposed to travel.

“I always felt this bond that there was a closeness with me and her, so as a child you try to wipe that memory and think of good times,” he said.

Mr. Parris, a businessman who today resides in St. Kitts, described the ceremony as a nice experience and noted that his sister Thelma was the who insisted that he attend this year and to lay a wreath in honour of their mother.