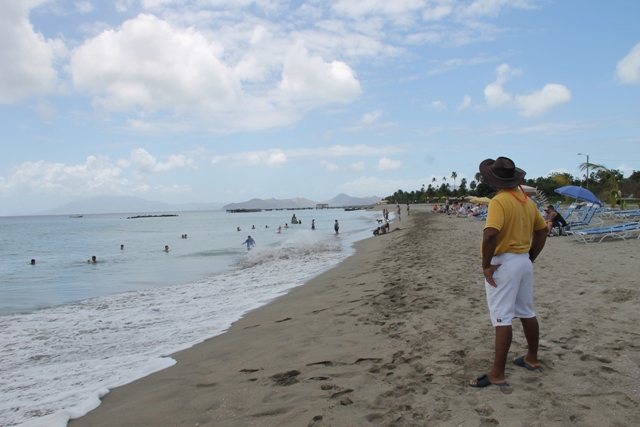 NIA CHARLESTOWN NEVIS (May 09, 2018) — For the first time, Pinney’s Beach, one of the most popular swimming areas on Nevis, has a number of safety features in place implemented by the Ministry of Tourism in the Nevis Island Administration (NIA).

The announcement came from Premier of Nevis Hon. Mark Brantley at the third monthly Premier’s Press Conference held on April 30, 2018 at the NIA’s Cabinet Room at the Social Security Building at Pinney’s Estate. He said the Administration wants to ensure that the new measures prevent the recurrence of tragic accidents there.

“We have now appointed lifeguards at Pinney’s. We have now engaged in the demarcation of the swim zones and boat channels from Pinney’s Beach Hotel to Paradise Beach. We are currently in the process of building a lifeguard tower down there…we hope that with those efforts we have engaged in we will enhance the safety and security of users of Pinney’s Beach” he said.

The Minister thanked Mr. John Hanley, Acting Permanent Secretary in the ministry who is spearheading the work being done at Pinney’s Beach.

Meantime, Mr. Brantley used the opportunity to seek the cooperation of both swimmers and boaters, advising them to adhere to the restrictions put in place for their own safety.

“We hope that by our efforts with their cooperation we will avoid any of these types of events in the future,” he said.

Mr. Tesson Danet, the life guard who has been on duty at Pinney’s Beach since February is a career boat captain of 33 years. He is also certified in crowd control management and Cardiopulmonary resuscitation (CPR). He is originally from Low Street in Charlestown but resides at Prospect.