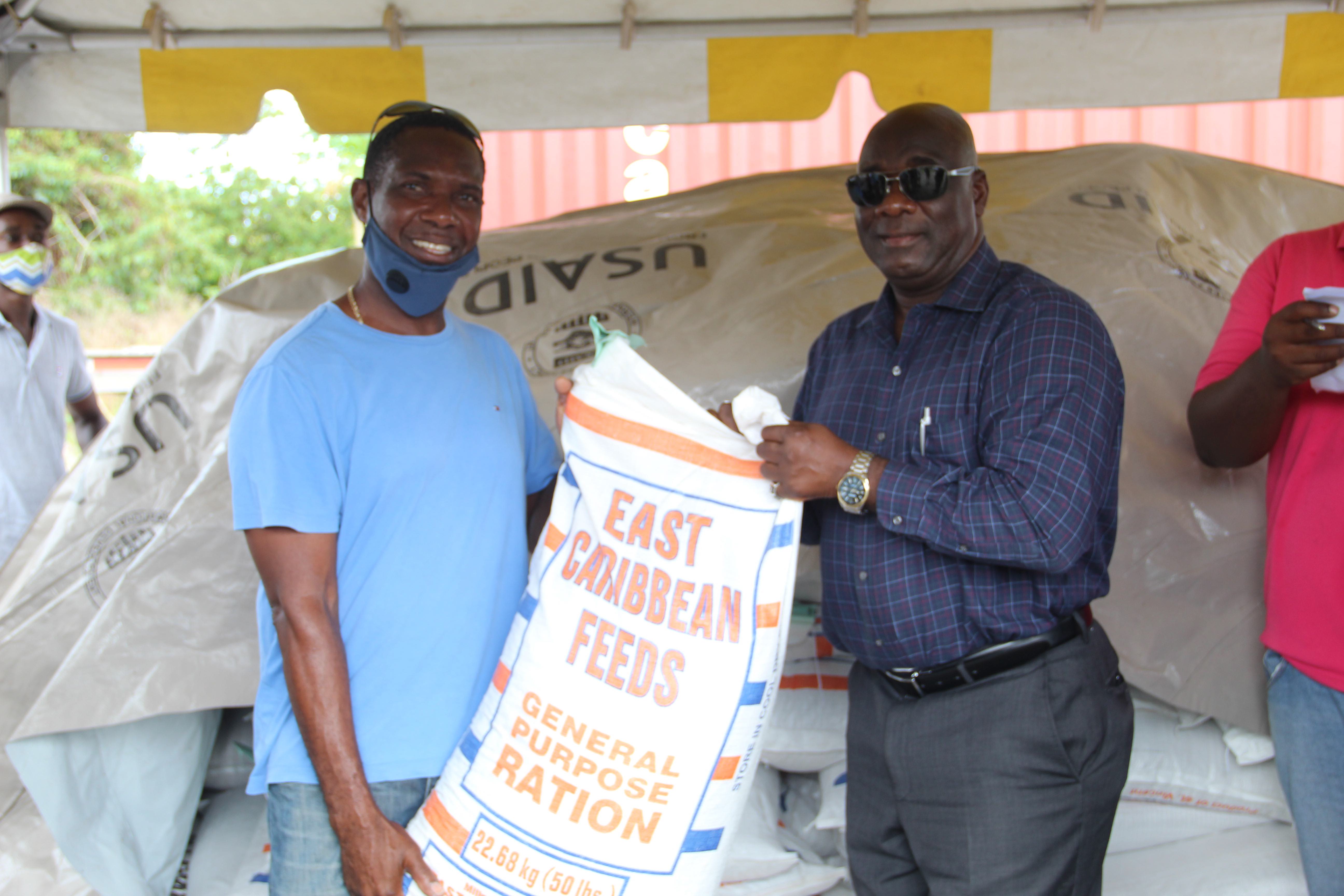 Hon. Alexis Jeffers, Deputy Premier and Minister of Agriculture in the Nevis in the Nevis Island Administration with one of the local livestock farmers who benefited from the recent distribution of $33,000 worth of free animal feed (file photo)

NIA CHARLESTOWN NEVIS (August 10, 2020) — The Nevis Island Administration has so far invested almost EC$1million in the Agriculture sector as part of its COVID-19 response.

That is according to Hon. Alexis Jeffers, Minister of Agriculture in the Nevis Island Administration (NIA).

During the third installment of the NIA town hall meeting series “Conversations with the People,” at the Albertha Payne Community Centre in Bath Village on August 6, 2020, Minister Jeffers commended the NIA Cabinet for its effort in propelling the agriculture sector forward.

In March 2020, the NIA unveiled a number of additional concessions to farmers and fishers as part of its continued emphasis on improving the food security of Nevis.

“The NIA has invested heavily in agriculture over the last three to four months. Of course over the years we have operated a budget that has been used to propel agriculture forward, but we’ve been doing some cost analysis and we realize that in recent months we have mobilised almost a million dollars to support agriculture on Nevis. That is significant and it suggests the seriousness of this government when it comes to agriculture, whether it’s crop farming, livestock farming, or even in the fishing sector,” Minister Jeffers said.

Mr. Jeffers, who also holds the portfolio for Agriculture in the Federal government, said the concessions have helped to generate renewed interest in the agriculture sector over the past few months.

This, he said, augurs well for improved food production on the island and provides economic opportunity for the people of Nevis, where they can look to exporting food to other countries in the region.

“That interest was brought about by a necessity for us to feed ourselves, but I also I do believe that we as a people have really come to see the need and and the role that agriculture can play in our immediate and future development. We do believe that at this juncture the opportunity has come back for Nevis to really place significant emphasis on agriculture so we can regain that status of being the bread basket of the region, exporting food to the other islands,” he said.

Hon. Jeffers noted that with financial and technical support from the Nevis Island Administration and allied regional and international agencies, local farmers and fishers have the capacity and know-how to reverse the trend of heavy dependency on imports.

“The dependency we have on imports certainly will create problems for us in the future, so instead of us finding ourselves in a situation where that dependency on imports continues, we now have to focus on areas of agriculture that we can strengthen, and areas we know we can excel in, because the potential is there,” he emphasised.