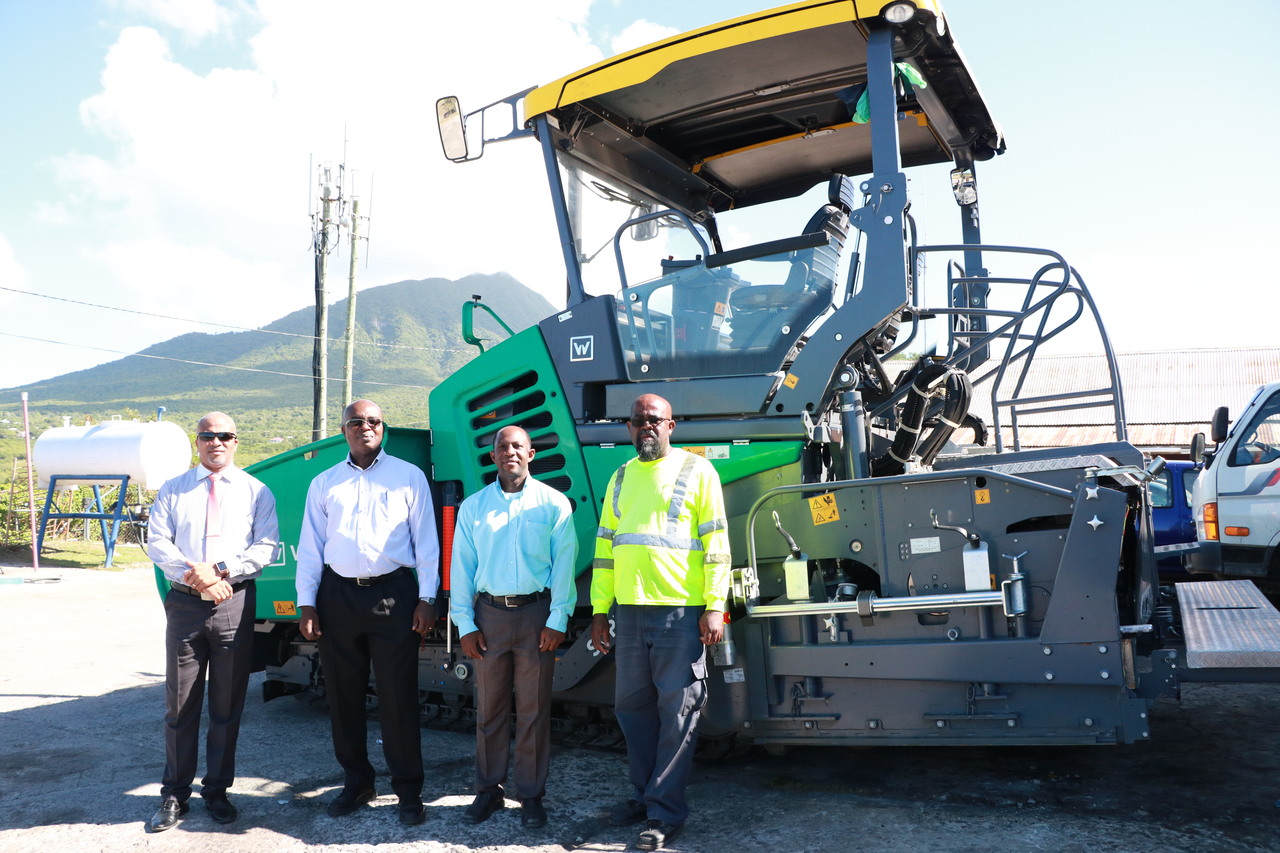 NIA CHARLESTOWN NEVIS (November 16, 2021) — The Ministry of Public Works and Communications in the Nevis Island Administration (NIA) has commissioned a state-of-the-art road paver that will advance the Ministry’s delivery of improved road infrastructure across Nevis.

During a ceremony at the Government Garage and Repair Shop on Tuesday, November 16, Hon. Spencer Brand, Minister of Public Works and Physical Planning in the NIA, handed over the keys for the Wirtgen Vögele Super 1800-3 tracked asphalt paver to Dr. Ernie Stapleton, Permanent Secretary in the Ministry of Public Works and Communications.

“The general public would certainly be aware of the high demand for improvements to our road infrastructure throughout the length and breadth of the island, and we as a government would have taken the decision to purchase a few pieces of equipment to aid in that process.

“Over the last two weeks or so we would have seen some training and field-testing of this equipment, and today I want to officially hand over the keys,” he said.

The Minister admonished those in charge of the new paver that it was a significant investment and as such they should ensure it is used with great care and due attention so as to preserve its lifespan.

Mr. Jevon Williams, Director of Public Works, thanked Mr. Brand and Dr. Stapleton for their efforts at procuring the valuable equipment. He said the acquisition of the equipment is an expression of the confidence the government has in the Ministry and Department of Public Works to continue its ongoing road program.

“I would like to publicly thank Minister Brand and Permanent Secretary Dr. Stapleton for that show of confidence by procuring this equipment, and as such we commit that we will take care of it as best as we can to ensure its longevity. The last time we would have had a new paver was probably 30 years ago, so our aim is to ensure that this paver lasts another 30 years,” he said.

Wirtgen describes its Vögele Super 1800-3 tracked asphalt paver as the most powerful tracked paver in its performance class, adding that it covers an incredibly wide range of applications.

During the ceremony Minister Brand also officially handed over the keys to the new milling machine which has been in operation over the past several months. He said he hoped the new pieces of equipment would go a long way in enhancing the development of the island.