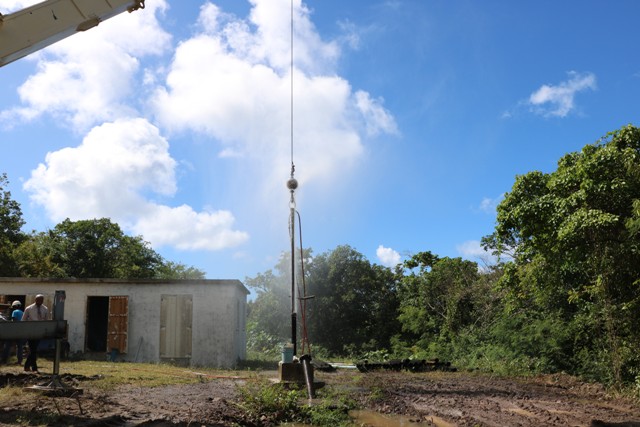 The Hamilton well in the process of being redeveloped by the Nevis Water Department on January 16, 2020

NIA CHARLESTOWN NEVIS (January 17, 2020) — The Nevis Water Department is in the process of redeveloping a water in Hamilton as part of the Nevis Island Administration’s efforts to provide more water to the island’s water system.

During a visit to the Hamilton sites led by Hon. Spencer Brand, Minister of Water Services on January 16, 2020, Mr. Clychawn Wilson, Head of Water Production at the department explained that they were in the process of preparing the well ensuring there were no obstacles once they were ready to pump the water out to a filtration system ½ a mile away.

“This well has been in rest for almost 10 years, and as a result a lot of sediment has been settling inside the well. So what we are doing here, we are using compressed air and we are blowing the water out of the well and what has happened is we blow the fines [sediments] as well with the water.

“What that does, we help the well to refill the aquifer. We allow water to flow back in. As we take out it flows back in, and we are trying to make sure that we get back the efficiency of the well. So when we are ready to put on the pump we have no restrictions, no blockages we have the amount of water that was initially gotten at the time when this well was drilled. So we’re actually redeveloping the well at this stage,” he said.

The Hamilton well had been abandoned after it was drilled more than 10 years ago after it was discovered that the water was unsafe for consumption due to the high levels of manganese and iron. However, with the department’s addition of a filtration system the water will be brought to safe levels for addition to the island’s water supply.

Mr. Wilson stated that aspect of the Nevis Water Enhancement Project commenced on Tuesday January 14, 2020, and spoke of the process.

“We started putting down the pipes. As you can see we have a 4inch going down to the bottom, and we have the 2 inch that controls the compressed air.

“So we have been blowing for a few days now we plan to cancel today and we are going to be putting down a ground water camera to see what has happened from the few days of blowing,” he said.

Once the well is redeveloped, the second step of the process would deal with pump testing.

a number of gallons. We are going to be going from hour-to-hour to make sure that the well is efficient and it has remained its actual flow,” Mr. Wilson stated.

Mr. Floyd Robinson, Manager of the Water Resource Management Unit, who led the site visit, gave some background on the Hamilton well which was part of a Bedrock Exploration and Development Technologies LLC (BEAD) arrangement with the NIA through the Ministry of Water Services to drill for additional ground water.

“If you would recall there was a well down at Maddens, one down in Fothergills and this one. The Fothergills and Maddens wells are currently in operation. This is the last of that particular project but this well we are going to feed…all the way up to Hamilton and into the filtration system.

“We have other sources coming from Charlestown that feeds into that area but this is the only one that has the manganese and iron problem that has to be solved. So this particular water is going to be passed through the filtration system and from there it goes into… the brand new tank for storage and that storage for distribution into the Charlestown area,” he said.

Meantime, Mr. Billy Lightsey, Project Manager for Florida Aqua Store, the company contracted to construct the new 400,000 gallon steel glass fused tank, which will replace a smaller fiberglass tank, says it is nearing completion and gave some detail about the new tank including its ability to withstand storm force winds.

“The new bracing at the top, the web dresses at the center of the sheet that’s all brand new. This is the first time I have seen that on a tank. This is all for stronger wind.

“This tank is going to go up to 28 feet. It’s two rings right now. It will be six when I’m done. The good thing about this, they are bolted together. You can take it down in the future if you decide to take it down, take it to another site and rebuild it. You can also take it apart at the bottom, put the jacks in it and raise it up and add rings to it and add capacity. You have that capability,” he said.

Once the construction is complete, the tank will be tested and sanitised before it is handed over to the Nevis Water Department.