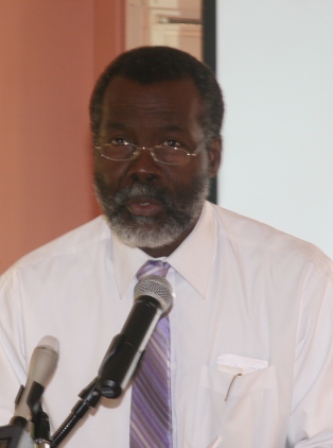 CHARLESTOWN NEVIS (June 15, 2010) — Organisation of the American States (OAS) Representative for St. Kitts and Nevis Mr. Starret Greene said he relished the opportunity to continue to work with all functionaries in St. Kitts and Nevis to ensure that technical cooperation projects and activities the OAS provided for the Federation was proportionally allocated for the benefit of citizens on both sides of the channel.

Mr. Greene made the comment at the official launch of the Disaster Management and Mitigation Project, Nevis at the Nevis Disaster Management Office (NDMO) at Long Point on June 09. The project is funded by the OAS Special Multilateral Fund for the Inter American Council for Integral Development (FEMCD).

He said the project was testimony that the OAS had made meaningful progress in project allocation and on completion Nevis and the Federation as a whole, would be a model of disaster management preparedness and response.

While the OAS Representative thanked Director of the NDMO Mr. Lester Blackett and others who had designed the project which ultimately won the approval of the OAS Education Committee and the IACD Management Board, Mr. Greene urged future applicants to utilise the same format.

According to Mr. Greene, one of the most attractive features of the project was the involvement of multiple agencies from the Federal and local levels; that each entity had a unique and special role and their involvement added considerable prestige to the project.

“The OAS sees this as a good example of a project that involves credible cooperation partners, thereby allowing for the sharing of best practices and the exchange of information while promoting and encouraging broader participation of all sectors of society. Such projects catch the eye of the OAS. It allows for the efficient use of scarce financial, material and human resources [and] that’s an important fact. It leverages allocated financial resources by attracting other entities and in the process optimises its funding and it promotes the mobilisation of external resources. 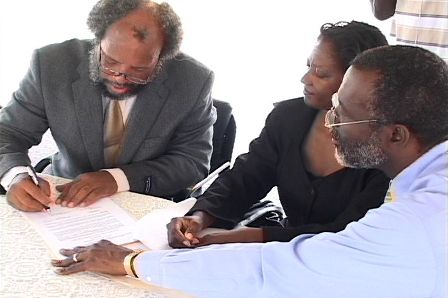 “In this connection therefore, this project shows considerable potential to meet its stated goals and objectives,” he said.

Mr. Green noted that the goals and objectives of the project were far reaching and it would require the unwavering cooperation of all the relevant entities involved.

He said it was important that every effort was undertaken to ensure that the project was carried out within the stipulated 14 month period and as such bottlenecks bureaucratic delays should be avoided. However, to achieve the objectives of the Project, it would require good management and the unwavering cooperation of all the entities.

The OAS Representative said his St. Kitts and Nevis based office stood ready to provide any support necessary and also the OAS technical experts in the Secretariat for Integral Development at the Headquarters were on standby to make the requisite inputs that would ensure the successful implementation of the project.