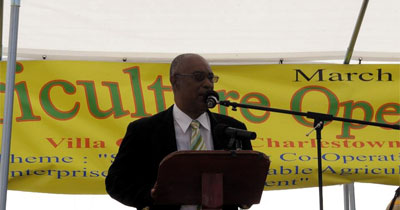 Premier of Nevis, Hon. Joseph Walcott Parry at Agricultural Fair
Charlestown Nevis (Wednesday,April 4, 2012) — Premier the Hon. Joseph Parry has said that he is pleased with the direction agriculture is taking in Nevis, especially in terms of support given to the farmers by the Ministry of Agriculture, and he is encouraging Nevisians to invest in farming.

Reflecting on the well attended 18th Agriculture Open Day held at the Villa in Charlestown on Thursday, March 29 and Friday March 30, Premier Parry said: “That exhibition was a demonstration, what we use in the local parlance as a ‘show off day’, to demonstrate what the farmers have achieved, and what the Ministry of Agriculture is achieving.”

Premier Parry, who was addressing the nation on Tuesday, April 3 on his weekly live radio program In Touch With the Premier on Choice 105.3 FM out of Nevis and other radio stations in the Federation, advised everyone in Nevis to continue to support the Department of Agriculture and the Ministry of Agriculture.

“Now we have shown off, for now we have demonstrated,” said the Premier, who is credited for having drafted the internationally-used agricultural concept known as the Nevis Model when he was a permanent secretary in the first NRP government. “We have to get back to work, to reach even higher heights, and I am quite sure that we will, and I am asking everyone in Nevis to continue to support the Department of Agriculture and the Ministry of Agriculture.”

After listening to the Permanent Secretary of Agriculture, Dr. Kelvin Daly who is a trained agriculturist with a doctorate degree, and the Director of Agriculture Mr. Keithley Amory address farmers at the Open Day, Premier Parry said that it pleased him to hear what the two agricultural officials had to say in relation to growth of the agricultural sector in Nevis.

“One thing that struck me, that he (Dr. Daly) said, in 2006 we were producing 4000 pounds of potatoes on Nevis,” observed the Premier. “I found that strange because I know that farmers normally grow potatoes and cassava. Those were the standard crops they grew in their day for produce and food and he says now they are doing 60,000 pounds of sweet potatoes.”

The Premier revealed that with the help of the Japanese and the Taiwanese, the government was in the process of establishing fresh water wells that will allow the farmers in Indian Castle and New River to proceed with serious irrigation, and to enhance their productivity and output. Other areas earmarked for the establishment of fresh water wells include the Cades Bay and Prospect areas, and the Premier said he hoped that it would also include the St. James area.

His advice to farmers was that they should aim at producing food all year round, saying many of the hotels in Nevis are using locally grown fresh foods. He noted: “All the hotels have used fresh Nevisian foods, and I am very pleased for that. Of course we want to feed ourselves and we want to feed the tourists who come here.”

Premier Parry applauded Dr. Daly’s efforts in teaching Nevisian farmers to understand the dynamics of supply and demand in production of food. Referring to a farmer who had called a radio station to say that he had destroyed tomatoes that he could not sell as a result of glut, the Premier advised that it would have been better to donate them to the hospital, or the schools and the senior citizens meal programmes.

“That is something that Dr. Daly is struggling with, to get people to understand that farm prices fluctuate,” said the Premier. “In other words, they rise and they fall according to demand and supply. When the weather is bad, and the supply is low, farm prices go up. That is all over the world and when the weather is good and there is plentiful, the prices come down.”

The Premier finally reminded his listeners that the Japanese will be in Nevis in June to sign a note with the government, and then they will be going out to tender, and later this year maybe around September/October the construction of the fisheries complex will start. He said the fisheries complex was expected to be completed within eighteen months.