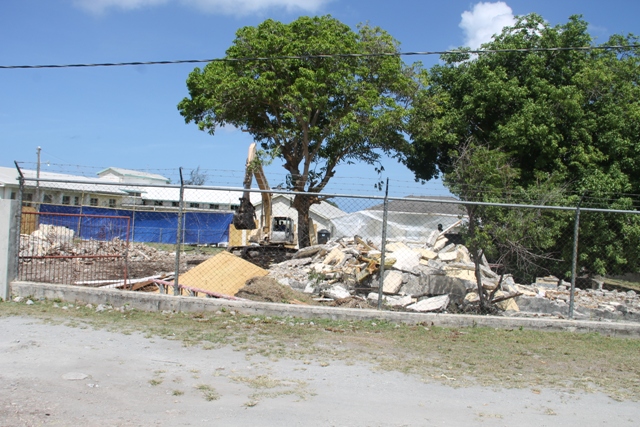 Ongoing demolition work at the old Nurse’s Home on June 23, 2014, making way for the construction of a new diagnostic wing on the grounds of the Alexandra Hospital. Work started on June 20, 2014
NIA CHARLESTOWN NEVIS (June 23, 2014) —  Demolition work on a dilapidated area known as the old Nurse’s Home at the Alexandra Hospital, began on June 20, 2014 making way for construction of a new diagnostic wing.
Deputy Premier of Nevis and Minister of Health Hon. Mark Brantley who was on hand to witness the commencement of Phase One of the project considered it to be a landmark occasion.
“I’m incredibly pleased to be here this morning. I thought it important that I come because this demolition marks the start of what we hope to be the first major expansion that we would have seen at the Alexandra Hospital in many, many years.
“We hope this expansion will house what we call a Diagnostic Wing, where we hope that the sought of brains of the hospital: the Lab, the Dialysis, the Physiotherapy, the various diagnostic tools in terms of Radiology, CT Scan and the-like, that we will now have that available here,” he said.
Mr. Brantley reminded that a new diagnostic wing at the island’s main health facility was a commitment by the Administration which had taken office about one year ago.
“This is a commitment from this Government in terms of enhancement of our Health Care System…
“Today is a good start and we are making some good strides in healthcare. It is never easy but I believe we are working diligently and my hope would be we would be in a position very soon to deliver a brand new wing of the Alexandra Hospital for the benefit of the people of Nevis,” he said. 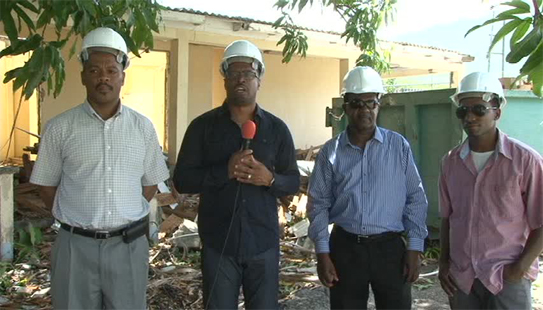 The Health Minister noted that demolition was being done by local partner Lefco Equipment Rental and Construction Co. Ltd. who had taken the necessary precautions to minimise health risks but asked the public for cooperation.
“We are really happy to be partnering with Lefco who has come on board and is taking care of the demolition…I, too, echo the sentiments and we are asking for the cooperation of the public and their understanding as we seek to do this.
“I can say to the public that we have erected barriers up here. We have sort to block out windows and other areas in the hospital so as to minimise any impact from dust and the like from this demolition project,” he said.
Hospital Administrator Gary Pemberton who was accompanied by his Assistant Johnson Morton explained that the project would be done in stages.
“This project will be done in phases and the first phase will be the construction of the Laboratory,” he said.
Pemberton also called on the support of all concerned throughout the various stages of the project. 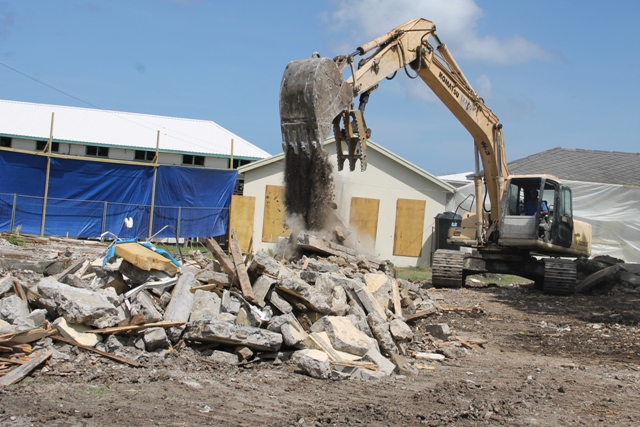 “We want to solicit the cooperation and support of not only the patients and staff of the Alexandra Hospital but also the public, as we go through this construction phase.
“We want to apologise for any inconvenience that may be caused by this construction but we want to assure the general public we will be doing everything in our power to ensure that the patients, the staff and the general public will be protected. We will do everything in our power to ensure that this construction is carried out in the best way possible and that we will not cause too much inconvenience to persons who would be accessing the hospital,” he said.
Also present was Lefco representative Randy Taylor in a brief comment said demolition work would be completed in three weeks.