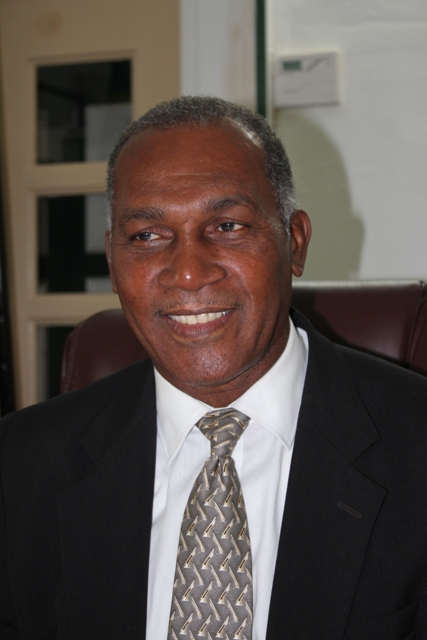 Premier of Nevis Hon. Vance Amory at his Bath Plain Office on June 20, 2014 reporting to the people of Nevis on recent discussions with the Federation’s Prime Minister Hon. Dr. Denzil Douglas regarding matters relevant to the Nevis Administration
NIA CHARLESTOWN NEVIS (June 23, 2014) — A solution may soon be in sight for the Land for Debt Swap matter with the St. Kitts-Nevis-Anguilla National Bank Ltd. (SKNANB), an issue that has been a sore point for the Nevis Island Administration (NIA) in recent times.
That disclosure came from Premier of Nevis and Minister of Finance in the NIA Hon. Vance Amory on June 20, 2014 while he reported to the people of Nevis on a meeting with the Federation’s Prime Minister Dr. Hon. Denzil Douglas in Basseterre on June 17, 2014 to discuss matters relevant to the NIA.
“Our first issue was to look at the matter of Land for Debt Swap as it relates to National Bank. We are all aware that we have been dealing with this matter for a number of months and we, I think, are at a point where we have a solution or we have the making of a solution which I believe will see this matter completed within the next couple of months.
“To this date, we have transferred lands which were held by the bank as a mortgage to secure the overdraft of the Nevis Island Administration. The value of that land which has been transferred is $29.1million. The overdraft level, as it stands, is at $65million and our understanding is that, once the bank has accepted the land which has been transferred, that the overdraft balance or that the overdraft would be reduced to the level of the value of the land,” he said.
According to Mr. Amory, the agreement would mean that with the injection of $29million the $65million overdraft would be reduced to $36million. The overdraft limit which was recently officially agreed by the Nevis Island Assembly of $50million which would allow the Administration $14million spending capacity.
“If we look at the new level with the reduction by $29million to $36million, we, therefore, should have, as an Administration, some $14million between where we are at the present time and the upper limit of $50million.
“I think, this is the beginning of putting to bed this ongoing saga of the Land for Debt Swap and coming to grips, with the excessive overdraft which, as I said, was officially at $50million but was allowed to rack up to $65million,” he said.
However, the Finance Minister explained that additional lands had been identified and transferred in an effort to further reduce the overdraft balance.
“The additional lands which are being identified to be transferred to reduce the overdraft limit to the zero level, we are looking at lands in the Pinney’s area. There has been some delay in transferring or identifying specific acreages for transfer but we are in discussion with the bank to give us some time to arrange for that transfer, so that we can have the total overdraft reduced to zero level,” he said.
Mr. Amory explained what an overdraft with a zero balance would mean to his Administration.
“When the overdraft is reduced to zero level, it means that the limit which we have requested of $50million will be available, not to be expended but as a guide to how much we can spend.
“I think this is an important issue in government’s finances. We have to ensure that we so manage our resources, within the confines of our revenue generation so that we do not continue to expand the expenditure to put the increasing pressure on the revenues of our country,” he said.
The Finance Minister further spoke to other benefits based on discussions with the Prime Minister and the Bank on the issue.
“The good thing is, once we have this arranged…we should then have the interest rate of 3.5 percent. This also will allow us to have a little more flexibility in how much we are able to spend. It does not mean that because we would have a zero balance, once we transfer the other lands or at this time having a $36 million overdraft with a $14 million flexibility up to $50 million, that we should become reckless in our expenditure.
“I want to say to the people of Nevis, that as we’ve always done, we shall seek to manage our resources, your business, your resources with prudence and caution but at the same time, ensuring that we provide for you the services which are necessary,” he said.
Acting Permanent Secretary in the Ministry of Finance Colin Dore accompanied Mr. Amory to the meeting.