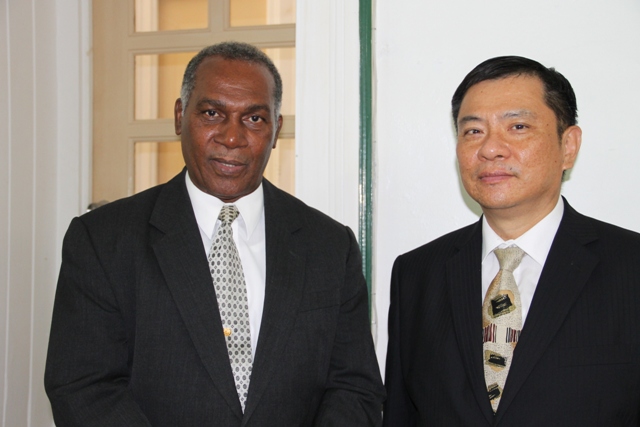 (l-r) Premier of Nevis Hon Vance Amory and Resident Ambassador of the Republic of China (Taiwan) to St. Kitts and Nevis His Excellency George Gow Wei Chiou during a courtesy call on July 14, 2015, at the Nevis Island Administration building at Bath Plain

Mr. Amory welcomed the diplomat who was accompanied by Taiwan International Cooperation and Development Fund Specialist Yu-Ming Lu and Embassy of the Republic of China (Taiwan) Counselor David Y. T. Yu. In comments after the meeting, he said a number of pressing matters relating to Nevis and their possible solutions were discussed.

“We’ve been talking about a number of important things, areas in which the Republic of China, through the Ambassador’s agency can help us.

“One of the issues we’re looking at is the possibility of [His Excellency Ambassador] Chiou’s government assisting us with the provision of a new government headquarters. I think it’s something which is necessary,” he said.

The Premier expressed that the Ambassador is also seeking to assist in areas such as the development of education, health facilities and health services.

In response, Ambassador Chiou said the embassy was pleased to provide help to the Nevis Island Administration, with whom the Republic of China (Taiwan) had a long-standing relationship.

He explained that the relationship began since the Federation’s independence in 1983 and they have worked together to promote the welfare of Kittitians and Nevisians.

In response to his tour of the existing NIA headquarters, the Ambassador said he understood the need for a new facility and he would make it his priority to make the proposal for a new building a reality. 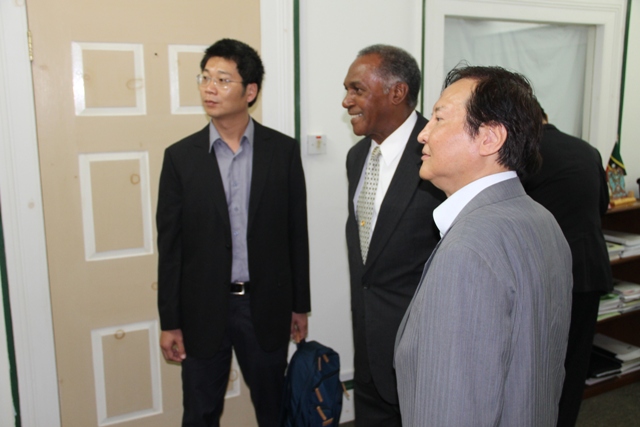