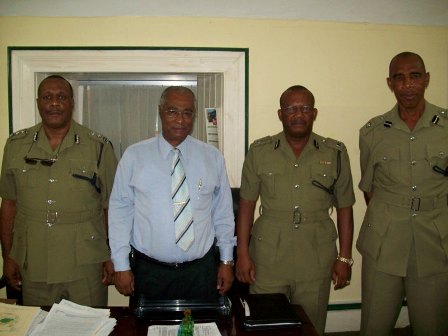 In continued efforts to combat crime on Nevis, Premier, the Hon. Joseph Parry, held discussions with top members of the St. Christopher and Nevis Royal Police Force.  The meeting was designed to heighten the awareness of criminal activity and to seek ways to stem crime. It was held on July 29, 2008, at the Premier’s Bath Hotel office.

In attendance at the meeting were Commissioner Austin Williams, Deputy Commissioner Stafford Liburd and Head of the Nevis Police Division Superintendent Samuel Seabrookes.

“This meeting has to do with what we discussed in the past and also what we are hoping to do in the future and this is how serious we take the issue of crime and crime prevention on the island of Nevis,” Premier Parry said.

While he congratulated the Police for bringing things under control very quickly, the Premier added that the government would take additional steps to improve the surveillance and monitoring of movement between St. Kitts and Nevis on the Ferry services.

Mr. Parry noted that for the past two weeks there were no incidents reported on the island of Nevis and that Commissioner Williams had been working very closely with Supt. Seabrookes and the Nevis Island Administration (NIA) to ensure that the matter of crime was dealt with speedily and effectively.

According to Commissioner Williams, forces from St. Kitts had been assisting Nevis and would continue to do so for as long as it was needed.

“We are all concerned about the upsurge of crime in the Federation and we [the police force] are working to curb the criminal activity,” he said.

Commissioner Williams indicated that a number of strategic operations had been set up to deal with crime which included a joint 24 hour mobile patrol with the Police and Defense Force, as well as bicycle patrol.  He also indicated that members of the police force were instrumental in the revival and creation of boys clubs on St. Kitts and Nevis.

The Commissioner reported that the police were working in earnest and to date, 24 illegal firearms had been removed from the streets, over 15,000 marijuana plants had been destroyed and approximately 1,500 traffic tickets had been issued.

“An 11 percent rise in crime has occurred in St. Kitts/Nevis and we are putting our best foot forward to address the issue and we are working even harder to bring comfort to the general public,” said Mr. Williams.

It was also disclosed during the meeting that there were additional plans for a close circuit monitor system to be implemented in Basseterre with a view to extend it to Frigate Bay and Charlestown.

With regard to the Culturama Season and the role of the Police, Mr. Williams said patrols will be available on the island and special attention would be to the Ferry services in an effort to monitor suspicious persons.