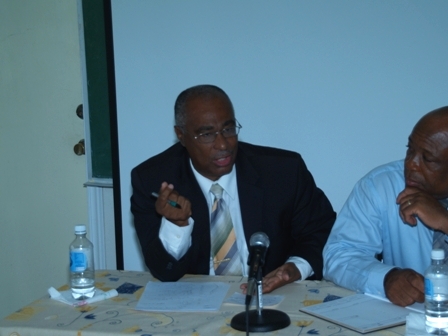 the private sector on Nevis in continued efforts to combat crime on the island, Premier of Nevis, the Hon.

Joseph Parry consulted with members of the private sector on Nevis on Thursday, July 24th 2008, at the

In his opening remarks, Premier Parry noted how pleased he was to see so many business owners had responded to the call to put an end to the recent spate of criminal activity in Nevis.

In his opening remarks, Premier Parry noted how pleased he was to see so many business owners had responded to the call to put an end to the recent spate of criminal activity in Nevis.

“We do not want business people to be afraid or live in continuous fear of these criminals; we want them to be able to stand up and continue to run their business as usual. We can not in any way make those individuals committing the crimes feel like they have won,” he said.

Panelists at the head table in discussions with members of the private sector on Nevis (L-R) Premier Joseph Parry, Deputy Premier Hon. Hensley Daniel, Cabinet Secretary Mr. Ashley Farrell, Superintendent of Police in Nevis, Mr. Samuel Seabrookes and Legal Advisor Hon. Patrice Nisbett
During the meeting, Mr. Parry articulated several ways in which he thought the business community could assist in stemming crime on the island and suggested the idea of having members adopt a school, a community or a child and to create avenues in which young people could engage themselves positively and productively.

He reminded the audience that while the Government was committed to doing its part, the rest of the society should also play an active role, if a significant reduction and possible eradication of serious criminal activity on the island was realised.

In addition, the Premier indicated that he was actively looking into a number of different ways to reduce crime which included assistance from overseas, finding male mentors for young people (in particular the boys); the placement of data boxes at the police stations for tips/information on crime; an increase in manpower of the police force and the presence of Army soldiers on Nevis.

Premier Parry noted that he would meet in about a
A section of the members of the private sector on Nevis meeting with Premier of Nevis Hon. Joseph Parry to discuss crime
month to continue dialogue with the business owners, the Police and his Government.

During the forum, Superintendent Seabrookes took the opportunity to offer some guidelines for the upcoming Culturama season. He said he would ensure that a strong police presence would be available so that the public could feel safe and would hopefully deter any criminal activity from taking place.

Mr. Seabrookes also made it known that it was very important that business persons invested in surveillance equipment and to come forward with accurate information that would assist the police.

“I am going to be honest with you; in some cases an individual with evidence might have to go to Court to witness or bring forth important information. I do understand how uncomfortable that can be but in some situations it cannot be helped, if we want the criminals off the streets,” said Mr. Seabrookes

After Mr. Seabrookes’ presentation, Premier Parry opened the floor to persons to give their opinions and/or observations on the crime situation on Nevis.

Numerous business persons in attendance were able to express their feelings on the relationship between the police and the rest of the community.  They all agreed that when they called the police, they either did not come or when they eventually arrived they were extremely late and they have no sympathy for the situation.  The group was assured that this practise will not continue in the future.

The meeting ended on a high note as the participants held hands and were led into prayer by Mr. Joseph Morton. The general consensus was that it was an excellent effort by the Premier to hold open and frank discussions with the private sector on Nevis.