Premier of Nevis, Hon. Joseph Parry shaking hands with Japanese Ambassador-designate to St. Kitts and Nevis, His Excellency, Yoshimasa Tezuka
Charlestown, Nevis (Saturday,April 28, 2012) — Premier, the Hon Joseph Parry, has said that as Nevis seeks to move out of a recession back into growth, the Japanese-funded EC$30 million Charlestown Community Fisheries Complex earmarked for Gallows Bay, will be part of a growth program that will lead to sustainability over the years.

“Speaking as the Leader of Government, it is not just a matter of fisheries,” said Hon Parry on Friday afternoon (April 27) at a grant signing ceremony between the Government of Japan and the Government of St. Kitts and Nevis at Gallows Bay. “What we are looking at is a cog in a whole wheel, and efforts to have a whole development policy for the island of Nevis.”

Premier Parry thanked the Japanese Government for honoring its pledge in spite of the devastating earthquake that hit Japan recently. The Premier also thanked the Federation’s Prime Minister the Rt. Hon. Dr. Denzil Douglas for personally ensuring that Nevis received the US$11 million (EC$30m) grant.

Forming part of the Japanese delegation at the ceremony were the Trinidad-based Japanese Ambassador-designate to St. Kitts and Nevis, His Excellency Yoshimasa Tezuka, and his wife Mrs Chiruzu Tezuka, Chief Representative of JICA Caribbean Regional Office Mr. Shoji Ozawa, and the Second Secretary, Japan Embassy in Trinidad, Mr Tsuyoshi Koga.

“If I may address you directly, your Excellency, I must say that Japan has been a nation of its word,” remarked Premier Parry. “After that catastrophic disaster in your country, I was worried that you would say that Nevis would  have to wait three years or five years, and that would have been reasonable.

“I was told, and I thought, that we are talking about a sum of eight million US dollars, which approximates 24 million EC dollars. Today I am learning that the sum is US$11 million, approximating EC$30 million. I can’t say Ambassador which other nation has given so much money at one go. We are here to thank you for it and to congratulate you for keeping your word in spite of your experiences in your country.”

Premier Parry drew the attention of fishers on Nevis to the days when it was stated that St. Kitts used to get all the money while Nevis got nothing. He told them what Nevis was getting was not a loan but a grant in aid, which was supported by the Federation’s Prime Minister the Rt. Hon. Dr. Denzil Douglas.

“I must say on his (Prime Minister) behalf today that at one time it seemed that we could have lost the project, and he singularly and directly intervened to ensure that Nevis got this grant of EC$30 million,” pointed out the Premier. “I am saying today, that we should be grateful that the demonstration of concern and statesmanship was demonstrated by Dr Douglas.”

Accompanying the Premier at the signing ceremony were Minister of Agriculture and Fisheries Hon. Robelto Hector, Junior Minister for Trade and Industry, Hon. Dwight Cozier, Permanent Secretary in the Ministry of Agriculture, Dr Kelvin Daly and other Senior government officials. During his remarks, Premier Parry singled out for mention, Nevis’ first Minister of Agriculture Mr Arthur Evelyn, who also witnessed the colorful ceremony.

“I want to assure the people of Charlestown, that as beautiful as Gallows Bay is today, I am quite sure that it will continue to be as beautiful and that its beauty will be enhanced by what we are doing. We are quite aware on the island of Nevis, that regardless of what we do, tourism is the number one priority. I want us to understand that tourism is the great mover and shaker of the economy, and that whether it is forwards or backwards, whatever linkages we make, tourism is the main engine of growth on the island.” 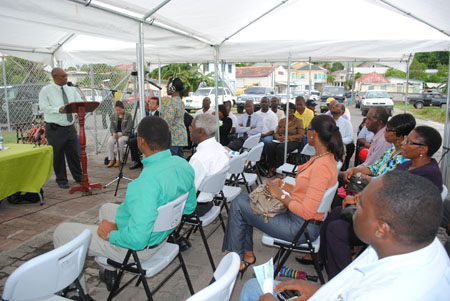 In ending his address he stated that his administration believes in excellence, as do all Nevisians. The NRP-led Nevis Island Administration has demonstrated at every step of the way that the only word that it entertains is excellence, he observed, adding that that excellence must have been felt from the top to the bottom.

“When you examine the results of this Administration you understand that we are serving the ordinary people of this country at all times,” said Hon Parry. “The Nevis Reformation Party is saying to you, we love you, we care for you, but look at our results, look at our actions and you decide if we are serious.”