CHARLESTOWN NEVIS (Tuesday February 09, 2010) — Nevis moved one step closer to devolution of power in the Constitution with the appointment of Nevisian Lawyer, Hon. Patrice Nisbett as the newest Attorney General and Minister of Justice and Legal Affairs in the Federal Government.  Mr. Nisbett was sworn in on Sunday, February 7th, to a thunderous applause from a huge crowd who witnessed the occasion at the Warner Park Stadium in Basseterre.

Premier of Nevis, the Hon. Joseph Parry hailed the appointment as an historic occasion for the people of Nevis, in an address to the Nation first broadcasted on Monday evening on NTV Channel 8 and local radio stations throughout St. Kitts-Nevis.

“It is historic in the sense that for the first time anyone from the parish of St. James or St.Thomas’ has been elevated to this legal position.

“For us as Nevisians this move is significantly important because the devolution of power  proposals was crafted by the Hon. Patrice Nisbett, who is now in the best position to jump start the process and manage it through the Parliament of the Federal Government,” said the Premier.

According to Mr. Parry, the Nevis Island Administration (NIA) led by the Nevis Reformation Party (NRP) had done an outstanding job in developing the island of Nevis in the last 3 years. 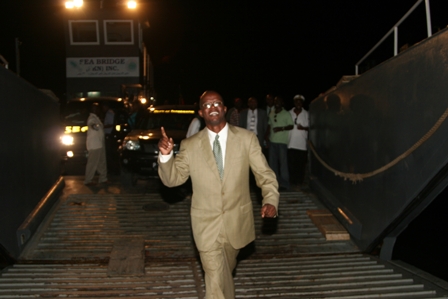 The new Attorney General and Minister of Justice and Legal Affairs in the Federal Government Hon. Patrice Nisbett walks off the Sea Bridge Ferry at the pier in Cades Bay shortly after he was sworn in

He also noted that the month of February was a significant month for the advancement of Nevis in the area of geothermal as three major decisions would be made in relation to the project’s financing, development of geothermal wells and the first geothermal plant construction.

“We [NIA] have decided that the expansion of Geothermal would provide every home on Nevis with the alternate energy and remove the surcharge from the electricity bill which in turn would provide cheaper electricity.”

The Premier also pointed to the many advances made in Nevis since the inception of the sitting NIA in the areas of housing, education and health.

“If we have all of these advances we need to be in control of the policy making for Labour, Education and for Health.

“Therefore, it is important that we are placed in a position, in terms of devolution, to control these matters for the benefit of the people of Nevis,” stated Mr. Parry.

The Premier further noted during his address, that in order for Nevis to secure the gains that had been achieved, the NIA had to do so through the policy making controls.

“In one stroke, through the appointment of the Hon. Patrice Nisbett as the Attorney General and Minister of Justice, we have placed ourselves strategically to do many things for Nevis,” remarked Premier Parry.

In the area of tax collection, Mr. Parry noted, that the NRP had discussed receiving monies owed to Nevis over the years even while it was in opposition.  The Premier also explained that he has discussed the collection of taxes with the Prime Minister of St. Kitts-Nevis, Hon. Denzel Douglas who had also agreed that taxes that are incurred in Nevis should be collected by the Nevis Island Government.

“At a time when the Four Seasons Resort is closed and at a time when we are not sure about an opening date.  The island of Nevis needs to collect its due taxes.

“This position has placed Nevis in a strategic position for laws such as taxation collection that would have to be directed and managed in the Federal Parliament and who better than the Attorney General to do so?” Mr. Parry inquired.

The Premier concluded that the appointment of the Hon. Patrice Nisbett will make it easier for Nevis to carry out the mandate for the island and also Nevis would be better positioned for autonomy by negotiation and mutual understanding which would make any Caribbean island proud.