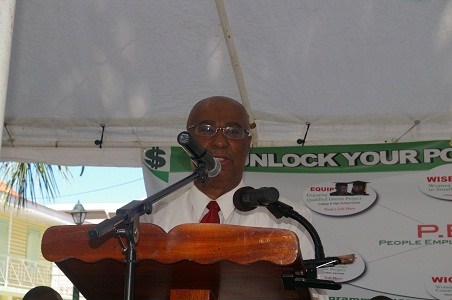 P.E.P is an initiative of the Federal Government of Prime Minister the Rt. Hon. Dr. Denzil Douglas, which according to its website www.sknpep.com, “is a government initiative which contributes to material, social and economic transformation, by the establishment of various projects that primarily will provide employment opportunities for qualifying nationals of St.Kitts and Nevis.”

The Nevis Reformation Party (NRP)-led Nevis Island Administration has adopted the program which will see business ideas come to fruition through funding from the Sugar Industry Diversification Foundation (SIDF).

During the launch, the Premier who has long established the need for the diversification of the Nevis economy, noted that many people have queried the rationale behind Nevis receiving money from the SIDF, when Nevis’ sugar industry died in the early 60’s, while in St.Kitts the industry was closed a mere 7 years ago, in 2005.

The Premier said in response, “Many persons from Nevis worked in the St. Kitts sugar industry, and one must note that the economy of the Federation of St.Kitts- Nevis is one,” the Premier said.

Underscoring the inter-relatedness of the St.Kitts and Nevis economies, and the P.E.P as a stimulus tool, Premier Parry said that when the Four Seasons Resort temporarily closed its doors in 2008, the island of St.Kitts also felt the effects, just as much as Nevis.

“The visitors to Four Seasons usually travel through St.Kitts, and with that missing, the airport, taxi persons and store owners in St.Kitts missed that income.”

According to Premier Parry, Nevis has already received assistance through the SIDF, including: for the development of the Bath Hot Springs and Saddle Hill as historical sites, the by-pass road, the Nevis Performing Arts Center (NEPAC), and the upgrade of port facilities in downtown Charlestown.

“I would be very pleased to see the P.E.P program utilized by the people of Nevis, as residents will be able to earn a living through skills training, opportunity for work experience and small business and enterprise development,” noted Premier Parry.

Friday’s launch of P.E.P was a full-day activity, where applications were solicited and volunteers explained the scope of the program to interested persons.

For more information and to apply on-line, visit: www.sknpep, com.