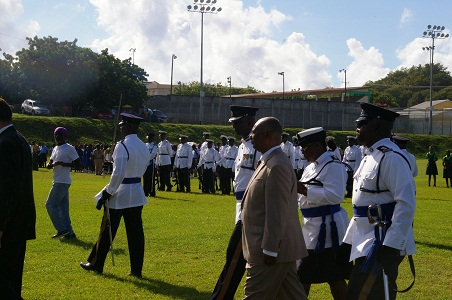 Premier of Nevis, Hon. Joseph Parry inspecting the uniformed bodies
CHARLESTOWN, NEVIS( THURSDAY, SEPTEMBER 20TH, 2012)–Premier of Nevis, the Hon. Joseph Parry has described the twin-island Federation of St. Kitts and Nevis as, “a young, confident nation that is not afraid of the challenges of the recession, and not afraid to be a participant in the world community, and a nation confident that we can make it”.
He made the comment during Wednesday’s Independence Day Ceremonial Parade and Awards Ceremony at Elquemedo Willett Park in Charlestown, as the nation turned 29.

“We have come a long way, our children get the best in primary and secondary education, in the last two years 40 of our teachers have sought training, and over 200 students are receiving university education with financial assistance from the Nevis Island Administration,” said the Premier. 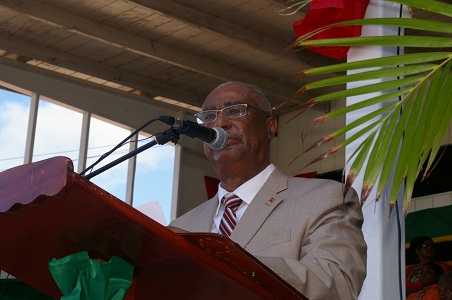 The Premier stated that the roads on the island of Nevis are in excellent condition without exception, and the water supply is second to no other island in the region.

According to the Hon. Joseph Parry, agriculture is flourishing on Nevis, housing under the Nevis Reformation Party (NRP) has been outstanding, and the island’s electricity supply is second to no other regional island.

He said we should be proud of our achievements, and “it is great to be Nevisian”.